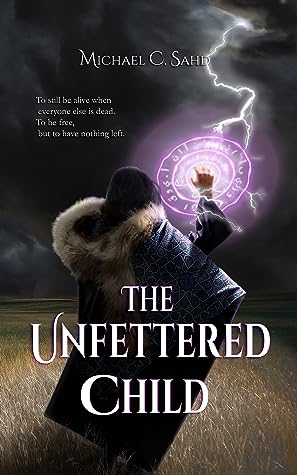 The Unfettered Child is a YA fantasy book sent to me by the author. Long ago, the great magician Abizou became trapped inside a gem. He eventually is let out, and replaced with the evil elf Illtud. Years later, Abizou's spirit inhibits eight-year-old Samara, who discovers great power when fighting back against the elves who attack her village. Samara discovers the gem, and Illtud manipulates her magic with the goal of getting his revenge on the Havallan Empire. Meanwhile, her father fights to get his daughter back, no matter the cost.

I haven't read any concept like The Unfettered Child and highly enjoyed this unique magical story! I also liked the addition of Elves and their mischievous nature. I liked this unique approach to having a young child hold so much power. It was fascinating to watch her brain struggle to understand what she could do and the ramifications of her actions when she lost control of her magic.

I was amazed at how Samara was portrayed accurately to her age with emotional breakdowns. She also obtained a strong sense of moral beliefs and showed a massive amount of guilt that only a pure, innocent child could have. I felt bad for her struggle to overcome gullibility and traumatic memories. This much power caused quite the emotional turmoil in her, and my eyes teared up by the end of the book. Speaking of the end of the book, it was astonishing and I was totally shocked at the ending!


I highly recommend you read this book!