Melody Finch by Ian B. Boyd and Gary Luck 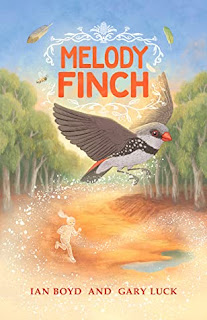 Melody Finch is a middle grade fantasy book that was sent to me by the authors and was published last week. 12-year-old Melody Klomp didn't believe in the "fairy tales" her grandmother told her about humans turning into animals- at least, not until Melody did. Once a girl, now a Diamond Firetail Finch. With some new wildlife friends, Melody starts a journey to warn her grandmother and save her from an evil fisherman set on illegal seal culling that puts the Coorong and her grandmother in danger. Along the way, she learns about the harshness of drought, invasive species, and the delicacy and connectiveness of ecosystems.

I enjoyed how educational the book was and the format in. For example, I had no idea that birds knew directions like north and south based on where the sun shines on their wings, or that cane toads' skin produces poisonous mucus. Rather than the facts being presented in a textbook, in Melody Finch the information is presented in a fun fantasy story. I enjoyed how the authors included the dangers of invasive species and some extreme, inhumane measures like seal culling.

I liked the evolution of the plot, how a goal for Melody to tell her grandmother about it finally raining turned into a much larger adventure and mission of protecting all of ecology and sustaining the circle of life. Ecology is a giant chain; if one link is broken, all suffer. Melody saw and learned first-hand how a single change, whether man-made or natural, can disrupt  an entire ecosystems. Melody Finch felt similar to many parts of Finding Nemo, which made me smile. The cover is also gorgeous!

Email ThisBlogThis!Share to TwitterShare to FacebookShare to Pinterest
Labels: 5 Stars, Animals, Fantasy, Inspirational, Middle Grade
Posted by pagesforthoughts at 11:31 AM

The Traitor's Jewel (Love and War Book 1) by Shreya Boyapati 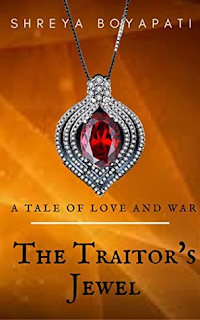 The Traitor's Jewel is the first in the Love and War YA fantasy series. This book was sent to me by the author. Following a betrayal and attack on Charlena Saxen's kingdom, it is discovered that it was lead by her own father (presumed dead). Charlena vows to kill him and defend what is left of her kingdom, with her best friend by her side. But the further into war she descends, the less about honor for her people it becomes and more about pure anger and revenge. As she struggles to contain these new emotions and her romantic feelings towards Raj, Charlena must decide if the reward of revenge is worth destroying her soul.

The Traitor's Jewel is a fast rollercoaster of emotions that alter between a perfect fairytale and a painful nightmare. The structure is  dialogue heavy, but was written so vividly that I could hear their voices in my head and felt very immersed in the conversations. Boyapati also did a good job ensuring that the revelations and new plot twists were surprising, but not enough to be unrealistic.

While fantasy, The Traitor's Jewel is extremely realistic in its depiction of PTSD and the other harsh realities and emotional pain that comes with taking lives. Killing is easier for soldiers, for Charlena, if she doesn't feel or care. She lives like a rock, relying on instinct and survival with no emotion. Love requires emotion and caring. Once she started to care for another human, slaughtering people became painful and inhumane. The blood and gore didn't matter to her as much when there was nothing to care or feel about. But once she let her guard down for her heart, guilt and pain flooded. However, love can also be something to fight for, to care if you survive.

This complex relationship between war and love (emotions) is the primary focus of the story and provides a wonderful theme. It is also unclear at times who is an ally and who is considered "bad", especially when considering the murders of war. The book also discusses the idea that "the ends justify the means" when fighting for something important. The Traitor's Jewel makes us question if the means are worth the end.