We Can Be Heroes by Kyrie McCauley 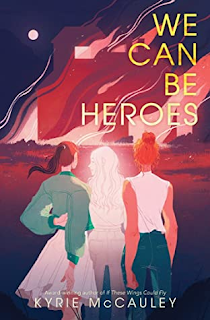 We Can Be Heroes is a YA inspirational realistic fiction book with a fantasy twist. This book was sent to me by the author and is released today!

Cassie Queen's life was taken by her abusive boyfriend Nico Bell when he took a firearm to school. After, he shot himself. Nobody cared that he was physically abusive and threatened to kill her, because Nico's father runs Bell Firearms, the company that controls their small town. Cassie's friends, Vivian and Beck, are angry. They want to tell Cassie's truth and hold Steven Bell and anyone who caters to him responsible. Beck decides to paint murals throughout the town of Greek mythology symbolic to the truth about Cassie's life and how she fell through the cracks. Oh, and one more plot twist; Cassie comes back as a ghost who lives in Beck's van.

We Can Be Heroes is a powerful, relevant story that illuminates how the rich and powerful can take control of the system. It establishes a clear link between domestic violence and gun control. McCauley paints a picture (no pun intended) of all the signs that were missed leading up to the murder and what should have been done when the abuse started. The police continued to cover up her cries for help because they couldn't let domestic violence be tied to Steven Bell. His father witnessed the abuse, heard the threats, and still left extremely powerful guns within his son's reach.

Having Cassie present as a ghost was a skillful part on the author. Rather than chapters simply explaining what happened in the past, the author created sections for Cassie's poetry, reflecting on her life and relationship with him. Even though she is technically dead, she does have her own character development of growing courage and strength through the activism of Beck and Vivian. We Can Be Heroes embraces the title; anyone can use their voice, art, or writing to make a difference in the world, no matter how powerful the person is you are going up against.
I highly recommend this book!
Title: We Can Be Heroes
Author: Kyrie McCauley
Publisher: Katherine Tegen Books
Pages: 368
Series: No
Rating: 5 Stars
Goodreads
No comments: