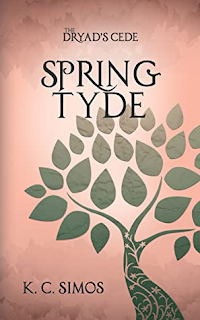 Feather Frost is the second book in the middle grade fantasy series The Dryad's Cede. The author sent me both books and recommended that I read Spring Tide, book 0.5, before Feather Frost.
Spring Tide takes place 400 years before Kindled Embers and Feather Frost, and tells the relationship between Chastain, a wood nymph, and Freddie, a young prince who enjoyed sitting under Chastian's chestnut tree. In Feather Frost, which takes place 5 years after Kindled Embers, Eliza's friend Prince Anders goes missing after an incident in the mountains. Concerned by the state of his chambers, she travels there to rule out otherworldly activity, but soon finds herself accepting the opposite and engaging in a war between the Ice Maiden and the Sea Witch, learning stunning revelations about her past along the way. 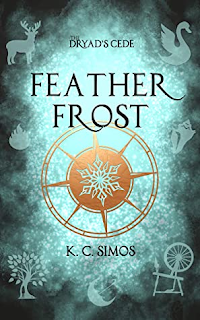 The short story of the friendship between Chastain and Prince Freddie in Spring Tide was beautiful, and I loved how the story spanned many years over the developing course of their relationship. While the ending is sad, it is also serene and sweet of how Chastain's legacy lived on. The ending also has an "aha!" moment, as it put some of the events in the first book, Kindled Embers, in greater context. I do wish that I had read Spring Tide first.

Readers not only become invested in finding Anders and saving the world, but in Eliza's wellbeing and personal journey. The foreshadowing was strong in Feather Frost, and many times I gasped aloud at the plot twists and my certainty of knowing where the story was going. The book also has many funny and cute moments that lighten the tone but still uphold the potentially dire outcomes.
It was interesting to see Eliza's growth in the past 5 years and what aspects of her personality and interests remained the same. Most scenes were vivid and enticing; this is not a book to start reading if its likely that you might be interrupted. The ending of Feather Frost was skillful in that it concluded the series, but it also leaves an opening for there to be another installment in the series in the future.
I highly recommend this series!
Title: Feather Frost and Spring Tide
Author: K.C. Simos
Publisher: K.C. Simos
Pages: 40 and 162
Series: Yes, Book 0.5 and Book 2
Rating: 5 Stars
Goodreads 0.5
Goodreads 2
No comments: 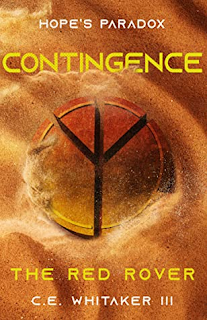 Contingence is the fourth book in the YA science fiction series The Red Rover that was sent to me by the author. Orion's sister, Kelly, is on the Yellow Rover base. She crashes into the planet Kethyrie, and is taken hostage and tortured. Meanwhile, as the cadets on the Red Rover base try to find the Yellow Rover, Dr. Marius struggles to cope with his deteriorating and dying body.

In comparison to the other three books in the series so far, this is my least favorite of them. This book switched perspectives from basically filler material to Orion's sister being tortured. The extreme shift from mostly uneventfulness to severe pain and torture seemed sudden and unnatural. The detail of the other cultures on Kethyrie is interesting, and Delly's torture and physical and emotional turmoil was well-written and vivid. A parallel can be drawn between Dr. Marius's opioid issue and Delly's torture, but I was disappointed in the other content aboard the ship.
The amount of unnecessary curse words bothers me. When used in rare occasions, they could sometimes make a point, however when used over and over they become meaningless and show a lack of sophistication and real emotion. I counted 72 instances of cussing. The sexual scenes and their implications felt out of place and shoved in to make the cadets' sections of the book eventful. Not to mention being a distraction, the only other purpose of these could be to elicit emotion in the reader, and for me that was anger and shock.
It is problematic that I only liked half the book. Contingence is emotionally heavy and I was disappointed in how it felt like the plotline came to a halt, a sharp contrast from the intense and fast-paced previous book.
I still recommend the overall series, but I was disappointed in this one and I emphasize this book being for older YA readers due to the mature content. 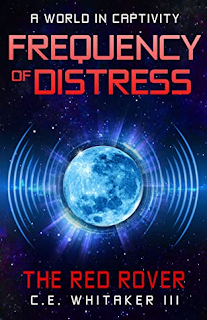 Frequency of Distress is the third book in the YA science fiction series, The Red Rover, that was sent to me by the author.
Instead of making a home on Araneus where the Aphotritons welcome them, the five cadets choose to leave and search for other Rovers in the hope that other humans survived the destruction of the Galicia star system. As they leave Araneus, they are attacked and captured to be slaves by the Draconoires, intergalactic pirates, on the dying planet of Felicity. Escaping this horror will be their toughest challenge yet, and will require more resilience, determination, and bravery than ever before.
"As beautiful as this world is, I’ll never consider it to be my home. Not while my family’s still out there,' Orion said."
Everyone's lives would be a lot easier if the Rover ships could send out a distress frequency call to the others instead of searching countless galaxies and getting killed nearly a dozen times. They have no proof that their families or anyone else from the other Rover Bases survived, and abandon a beautiful world in the hopes that their families are still hovering in space somewhere. If it were me, I might want to put the past behind me and move forward on a safe planet. Maybe, if the cadets knew what was ahead of them, they might have made a different decision. Or, was the horror that they go through worth the value of family? It is ironic that "Felicity" means "great happiness", according to Merriam-Webster. At what cost does it take to be happy in a dying world?
Frequency of Distress is almost the definition of apocalyptic and dystopian. I loved the uniqueness in the plot, like the alien trapped in a glass tube who's powers stabilize the seismic activity of Felicity. While a familiar concept of being kidnapped and imprisoned as slaves, Whitaker embedded unique and clever details that made the situation original. I admire the teens' inner strength and determination. It is almost impossible to believe their grand escape and seems like something belonging in a Dwayne Johnson or Marvel movie. I admire these kids for their determination to not let the Draconoires break them.
I highly recommend you read this book! I do recommend this book for older YA readers due to some mature content and violence. I look forward to reading the fourth book, Contingence.
Read my review of the second book in this series, Clash of the Celestials, here.
Read my review of the first book, The Red Rover: Origins here.
Title: Frequency of Distress
Author: C.E. Whitaker III
Publisher: C.E. Whitaker III
Pages: 286
Series: Yes, Book 3 of 5
Rating: 5 Stars
Goodreads
No comments: