The Octopus Under the Bridge by Alice Kinerk 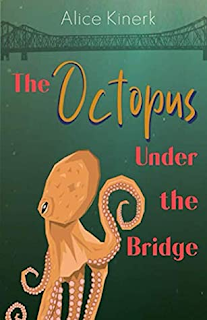 The Octopus Under the Bridge is a middle grade dystopian book that was sent to me by the author. After American troops were deployed into the Middle East to search for missing teenagers, a bomb was dropped on the White House that decimated most of the East Coast. Since then, food is scarce, electricity is a luxury, and rival groups like the Collectivist and Phoenix fight and terrorize the populations. After the President is shot, 14-year-old Jay Everton's parents send him away to live with his grandmother on the Key Peninsula. But when Jay learns of his father's secret work and Phoenix attacking his family and friends, he must sail back to Tacoma and save his sister.
For a book this short, I am surprised that The Octopus Under the Bridge still contained a developed plot structure with round characters! Jay is shy and intelligent, and I liked watching him gain the confidence to stand up for himself and his family. The hint of romance with Sarah was also nice. The setting is eerie and mysterious. I love the amount of imagery and other figurative devices that were used to make the setting rich and full of suspense.
I like how the book contradicted the Guilt by Association Fallacy, which unfortunately is common in times of conflict, as is assumption of good and evil. The Collectivists and the Phoenix both have major issues with the current government, but have different ideas and ways to get there- similar to the octopus and the squid. Initially I had a hard time understanding the theme and metaphor around the octopus, but further into the book it did make a lot more sense. Well, now I know that Washington is famous for octopi!
I will say that the cover definitely needs some work to convey the seriousness of the story. Never from reading the synopsis on Amazon (or the nonexistent one on goodreads) or looking at the cover did I guess that this would be an exciting dystopian book! While the ending is climatic and does conclude Jay's specific journey, I am still very curious as to what happens to the nation and Tacoma. I wish it was longer, and I hope Kinerk writes a sequel! However, the length could make it more appealing for younger readers.
I recommend this book!
Title: The Octopus Under the Bridge
Author: Alice Kinerk
Publisher: Alice Kinerk
Pages: 142
Series: No
Rating: 4 Stars
Goodreads
No comments: 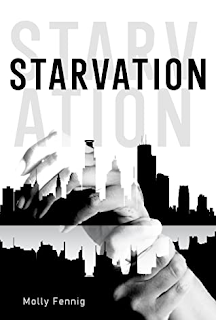 Starvation is a YA realistic fiction book that was sent to me by the author. Told in alternating chapters between the past and the present, Starvation illustrates the progression of 16-year-old Wes McCoy's anorexia and the path to getting better. When Wes learns that his girlfriend, Caila, is starving herself, Wes does everything he can to help her and understand why she is hurting herself. After his brother dies in a car accident, Wes ends up turning to her habits to gain control, and becomes trapped in a downward spiral.
I screamed at my computer screen "No! That's it???" There has to be more. I want more! Do they both get better? Do they get married? Get to go to college? However, I suppose the emphasis on uncertainty matches with the unpredictability of eating disorders and other mental illness. Relapse is extremely common in anorexia patients.

Starvation portrays the most accurate and realistic view of the development of eating disorders that I have ever read, and I definitely learned more about the motivations behind anorexia. The counter-argument against why a person cannot just put food in their mouth and swallow was powerful and the utter fear was astonishing and eye-opening.

I love that Starvation is told from a male perspective, as there is an issue of eating disorders being viewed as victims to mostly girls, as well as other mental illnesses. Its incorporation of suicide was also very accurate and did tackle frequent misunderstandings of why someone would end their life, as well as teach some of the warning signs of suicide and other mental conditions.

If you are interested in this book, I recommend that you also read What I Lost.

Wish Upon a Star by Jessica Barondes 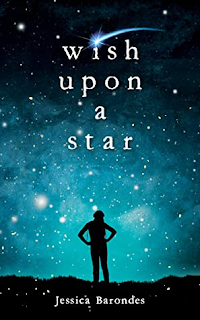 Wish Upon a Star is the until-now unpublished manuscript of the Wish Upon a Star 1996 film. This fantasy book was sent to me by the author. One night upon seeing a comet, 14-year-old Haley Wheaton wishes that she could be Alex, her older sister. She never thought that the next morning, they would have switched bodies! Now Alex is in the body of a straight-A, unpopular student and Haley becomes Alex, a beautiful, popular senior who barely passes. Haley comes to learn that her sister's life isn't all that perfect after all.
Wish Upon a Star was very cute, the type of story that results in a goofy grin on your face. I have always loved body-switching stories. My mom entered the room and said "I can tell it is a good book from the expression on your face". In addition to being completely hilarious at times, there were also serious, heartwarming moments. Haley and Alex start off as almost total opposites in personality, appearance, and decision making. It was fascinating watching them become immersed in lives they never understood. Both girls learned valuable life lessons and the importance of supporting and understanding each other as sisters, and came out better people in the end.

The movie is free on YouTube: https://www.youtube.com/watch?v=3ZH1_bRbSiY. It stared Katherine Heigl and Danielle Harris. If you are reluctant to read this book because of your view on the movie, ignore it! The book is a quadrillion times better than the movie, which in my opinion cut out important scenes and dialogue, leading to some misinterpretations on the character's motives. The acting could have been better and felt more foolish than the book suggests.

Unlocked (Keeper of the Lost Cities Book 8.5) by Shannon Messenger 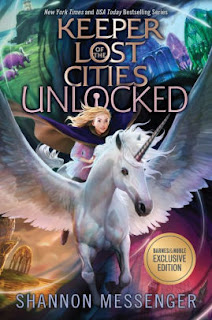 Unlocked is book 8.5 in my favorite middle grade fantasy series, Keeper of the Lost Cities. After the 500 pages of bonus material, readers will see a shorter story picking up after Keefe's mom's actions in Legacy. Narrated by both Sophie and Keefe, Unlocked discovers Keefe's new identity and Sophie's escalating decision to take solo action against the Neverseen.
Oh. My. GOSH. If you think you can skip 8.5 and go straight to book 9, you are dead wrong. The (literally) explosive revelations and major character and plot development is shocking, and I am glad I read it! Having Keefe and Sophie alternate perspectives was a smart idea, and I love Keefe's HUGE internal conflict over the changes and new powers that his mom forced in him. Unlocked is one of the most intense moments in the series so far and is packed with a heavy load of emotion. I have never seen Keefe so vulnerable and defeated. Keefe is by-far the best written and developed character in the series; Sophie and the others feel a bit static.

BUT, I have some major concerns and issues with what Messenger and her editors decided. It feels like Shannon Messenger is drawing out the series. There did not need to be a book 8.5. Yes, there is a major cliffhanger and there are new developments, but Messenger could have easily put the whole thing in book 9. The first 500 pages contains mostly summary information from the previous books. The majority of those pages are the Registry Files, which contain extremely detailed information about each character that is not only irrelevant and repetitive, but unrealistic. And why include it- does Messenger think her readers are suddenly going to forget? I did learn some interesting tidbits and enjoyed Keefe's detention record and the quizzes, but it easily could have been 150 pages instead of 500.

I wish I waited for the book to be in libraries instead of buying the giant physical copy, and I would have if I knew what I was buying. Amazon claims it's the #1 New Release in Children's Friendship Books, but if we all knew that nearly 70% of the book is not the book, then I know it would be rated much less. The description is completely misleading, claiming to "delive[r] what fans of the series have been begging for! Told in an exciting new way, the saga continues with plenty of huge reveals and shocking new twists—plus a complete series guide with beautiful color and black-and-white illustrations and other awesome bonuses!". Uh, nope, a 500 page encyclopedia is not what fans have been begging for, and the order is inaccurate- this makes it sound like the the "complete series guide" is at the end with other bonuses. Heck, why didn't they flip it and put the story first?

Barnes and Noble put at the very end "Unlocked also includes a comprehensive guide to the world of the Lost Cities"- no, Unlocked also includes the actual story! Also, if anyone got the special edition and can't find the pull-out-poster or Messenger's special artwork, take off the jacket of the book! It is beautiful. However, I am disappointed that the beautiful artworks were scenes of previous books and not particular to Unlocked.
I have to say this is my least favorite book in the series. I highly recommend the actual story, but feel free to skip everything else along the way- or at least put it off for another time.
You can read my reviews of all the books in this series here.
Title: Unlocked
Author: Shannon Messenger
Publisher: Aladdin
Pages: 746
Series: Yes, Book 8.5
Rating: 3 Stars
Goodreads
No comments: 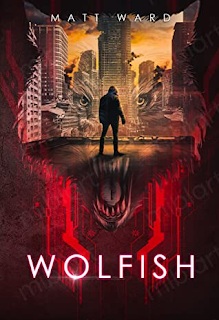 Wolfish is the sequel to Cynetic Wolf in the Wolfish series that was sent to me by the author. Still reeling upon the death of his wife and son at the hands of a betrayal, Raek is placed in the role as President. The near impossible task of uniting the immortals, cyborgs, enhancers, and half-animal hybirds (like him) becomes harder with new enemies, terrorist attacks, and a deadly virus. Bringing his brother into the government to help also may not have been the best idea.
The emotional turmoil and depression that Raek suffers after the loss of his wife and son is described amazingly, and makes this story heart-wrenching. This is one of the few books I have read with such genuine pain and grief. Raek is part wolf, so he is not entirely human, but the intensity of his emotions make him more relatable to readers. While science fiction, the dilemmas in the book have strong parallels towards long-standing issues of tyranny, racism and Islamophobia, as well as the coronavirus.
Almost every kid at some point dreams of being President (at least I have), and Wolfish does prove that the job is a lot harder than it looks. Having a high moral standard and setting out to help people is often contradicted and stopped by red tape and other politicians with selfish motives. Mistrust and conspiracy are so common in governments that even Raek, whose goal is only to unite and heal the people, is easily undermined. It was very frustrating to see a man with pure intentions be dragged down by those of tyrannic motives.
A bonus was how Wolfish also addressed traumatic brain injuries like CTE. Watching how a peaceful, righteous man evolved into someone with an entirely different and opposite personality. I love it when villains are not as simple as they seem.
I highly recommend this book!
See my review of the previous book in this series, Cynetic Wolf.
Title: Wolfish
Author: Matt Ward
Publisher: Myrmani Press
Pages: 277
Series: Yes, Book 2
Rating: 5 Stars
Goodreads
No comments: