The Coming of the Spirits (Spirits Book 5) by Rob Keeley 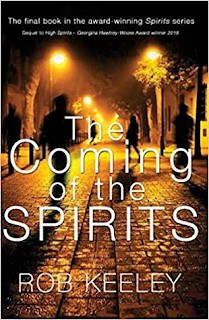 The Coming of the Spirits is the fifth and final book in the middle grade fantasy series Spirits that was sent to me by the author. Ellie and Clara's plan in 1936 to set World War 2 back on track went awry. Present-day has the Nazis controlling Britain with the powers of the spirit world. History calls upon Ellie one last time, to finally be the Grand Defender and seal the breach between the spirit world and the mortal one. Except this time, Ellie has had enough with others ordering her future. Torn between the past, present, and the future, Ellie's friends from all over the timeline must come together and help her save the world one final time.

The majority of the series focused on Ellie helping others and bonding with other characters; in contrary, The Coming of the Spirits delved deep into the root of who Ellie is and the events in her life that changed time. Ellie has gone from a child to 18. In that time, she has grown not only physically, but emotionally and mentally. The setting of the books have aged with her appropriately. This the most intense and dystopian of the series. One climatic event was even a bit scary to me with its detailed imagery. As usual, Keeley's descriptions and settings were vivid and real. It is actually hard to believe that it was only 144 pages with how much had happened and how gripping the plotline was.

The series did wrap up surprisingly well. The ending was definitely unexpected. I was not prepared for that change of destiny, and I cannot find any foreshadowing that leads to this shock. While heartbreaking in the moment, I can understand why Keeley chose to end the series this way. While the choice seems almost contradictory to the plotline and previous books, it does attune to a theme of changing destinies and the course of history.

Overall I largely enjoyed the series and highly recommend it. The second book, The Spirit of London, is still my favorite.
See my review of:
The forth book, High Spirits
The third book, The Sword of the Spirit
The second book, The Spirit of London
The first book, Childish Spirits
Title: The Coming of the Spirits
Author: Rob Keeley
Publisher: Troubador Publishing Ltd
Pages: 144
Series: Yes, Book 5 of 5
Rating: 5 Stars
Goodreads
No comments:

Epiphany (The Heir of G.O'D. Book 2) by Harper Maze 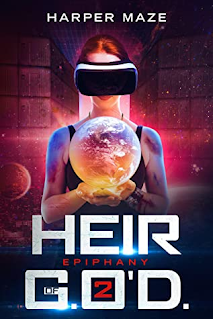 Epiphany is the second book in the YA dystopian series Heir of G.O'D that was sent to me by the author. In 4 days, Hailey's comet will destroy the virtual reality world Sol, unless the Heir decides to stop it. Upon getting Ana's visor upgrade and finally being able to see the real-world, she is discovered by the Church of G.O'D. and kidnapped, only to discover that she is Gaiana O’Drae- the Heir. With every group of political and economic power after her for personal gain and betrayals at every turn, she must decide who is worth trusting and live long enough to make the world-changing choice.
(For consistency's sake, I will continue to refer to her as Ana)

This was a huge gamble for her father to take. Create a comet to destroy Sol on her 18th birthday unless she finds out that she is the Heir, can escape all the people trying to kill her, get into his mansion, know what to look for, all in the hopes that she will... press a button? There are a million ways this extremely elaborate plan could have ended horribly. How could he even count on her still being alive? I feel very bad for Ana to have this giant burden on her.
While I understand the corruption in their world, there should have been a stronger support system for her. One thing I do not understand is the amount of kidnappings and betrayals. While I understand trying to influence her decision, I wish more people treated her with respect and worshipped her the same way they worshiped her father. It is my hope that in the next book that she can rise up and become the leader of the Church of G.O'D and help both the suffering in the real-world and maintain fairness in Sol. Those aren't necessarily critiques, because writing in a way that causes emotions in the reader is helpful for drawing them in longer and making connections with the characters.
I do not know what I would have done in her situation. Honestly, I see the merits of destroying Sol and focusing on present real-life issues such as building safe housing, access to food and water, education, and medical care. On the other hand, Sol is so entwined with their economic society that destroying it with no plan of support ahead of time would be catastrophic. I look forward to reading the next book and finding out what she chooses to do and who she can finally trust to do it with.
I recommend this book and look forward to reading the final one, Exodus! Read my review of the first book in this series here.
Title: Epiphany (The Heir of G.O'D. Book 2)
Author: Harper Maze
Publisher: Harper Maze
Pages: 256
Series: Yes, Book 2 of 3
Rating: 5 Stars
Goodreads
No comments:

Rise of the Sidekicks by Charity Tober 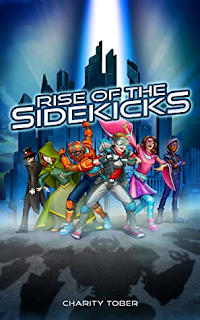 Rise of the Sidekicks is a middle grade fantasy book that was sent to me by the author. 12-year-old Ethan Parker attends the Justice Academy school for kids with superpowers. He and his friends are ecstatic for the Sidekick Tryouts competition where the Nexus Guardian superheroes of the city will choose recruits. While he doesn't have powers like super speed or pyrokinesis, he hopes that his tech skills and inventions will impress them. But a week before he can, the "Hero Smasher" tricks the Guardians into leaving and mind-controls the population into surrendering all the supers for neutralization. Ethan and his friends band together to take on the Hero Smasher and his army of mechanical robots.

While a very familiar concept of those with powers banding together to save the city and mind-controlled robots, Tober weaved an interesting plot of the Sidekick auditions and the kids desperate to prove themselves to the Guardians. Irony is, they aren't here to see it. The author also did a great job of character development, overcoming self-doubt and fear. Rise of the Sidekicks is the type of book that can be read over and over again, even knowing the ending. For the author's first middle grade book, it is impressive.

A central theme was also what defines a superhero. Ethan doesn't have flashy powers, and battled the belief that he doesn't have "real" superpowers. His cleverness, tech-savvy skills, and leadership abilities are outstanding. Ethan did remind me of Richard Greyson (Robin), from the Teen Titans, and most others reminded me of those featured in The Arrowverse. That isn't necessarily a bad thing, as it made the book a bit nostalgic and more enjoyable.

The only complaint that I have is the lack of origin for their powers. Where did these powers come from? Why these families? The Hero Smasher's background story of why he came to hate the Guardians was strongly written, and it made perfect sense. His origin story was great, but I am just missing the piece of people had these powers to begin with. But for middle grade readers, they may not care about that part. 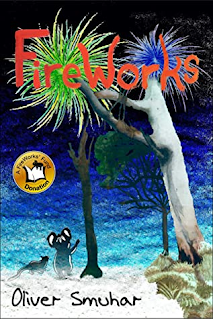 FireWorks is a middle grade book that was sent to me by the author. This tells the story of how Illuka, the koala and Bouddi, the sugar glider, managed to survive the Australian Bushfires (known to the animals as Alinta). After their home and family are dead and destroyed, these two embark on a journey to warn other family herds, making new friends along the way.
One thing I liked about the book is the pictures of the different animals and the various facts and descriptions of them. Personally, I have never heard of dingoes before. I also learned that the Eastern water dragon can climb trees, and I learned that the scientific name for the red-tailed black cockatoo is Calyptorhynchus. The drawings of the animals are very helpful for imagery, and while black and white, the actual pictures of the bush fires and their impact is also educational.
I did enjoy the story, and it felt well-written. It is  obvious that the author put a lot of work into the book. I'm not sure that a bibliography fits with a middle grade book, but the sources can be helpful if the reader wants to look up more information. I also love that most of FireWorks' profits go to charity.
One major issue that I have is their name for the fires- Alinta. Coincidentally or not, that is also the name of one of Australia’s fossil fuel energy companies. While the meaning of the name Alinta is fire, there are over a hundred other names that mean fire or flame. It is unlikely that the author, who is Australian, would not know the name’s other connotation. Even if accidental, the political message (fossil fuels = climate change = more wildfires) is too large to ignore. That being said, the target audience is for middle grade readers, and they likely would not understand the connection and the political statement. If intentional, that is an issue in itself of writing for the target audience. Alinta makes the audience seem older, in the YA group, but literally stating the moral of the story is on a different age spectrum, perhaps elementary school.
UPDATE 7/10/21: Smuhar stated "I had no idea that Alinta was connected to an Australian fossil fuel company. I did not intend to make FireWorks a political statement on fossil fuels and global warming. It’s overall goal was to highlight the reality of the bushfires and their impact on the Australian community." He is currently looking into ways to update the name.
I was conflicted with how to rate this book, but I feel that the issue is great enough to rate it 3 stars, despite enjoying the story.
For a middle grade audience I do recommend this story.
Title: FireWorks
Author: Oliver Smuhar
Publisher: Mountain Blue Publishing
Pages: 275
Series: Not yet
Rating: 3 Stars
Goodreads
No comments: