Above World by Jenn Reese 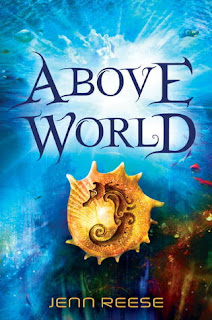 The Above World Series is a middle grade trilogy for readers who love fantasy and science fiction. Book number one, Above World is a good read. Long ago, technology made a way for people called the Kampii to live and breathe underwater with special breathing necklaces. But now, they are starting to fail. Aluna is thirteen-years-old, and suspects that something is very wrong with the necklaces. At a special ceremony where she is supposed to get her tail, she stands up to the council, who deny that anything is wrong. Aluna has lived in the City of Shifting Tides her whole life, but now with her friend Hoku's help, they will run away into the world above to find a cure. Little do they know, there are other people who also have adapted to unusual environments, like Aviars, who have wings and live in the sky. Despite the sea and the sky being opposites, they have to work together in order to save their tribes- and the whole world.

The characters are well-developed, and their personalities really come through. Hoku is more logical, and a good influence. Aluna is more of an act-now-think-later type of person, which came in handy in certain situations. The plot was easy to follow, and I never once had to re-read anything for clarification. I like that the book gives a lesson. Above World teaches that despite each others differences, you can still be friends.

I love science fiction and fantasy, and to read a book that has both is pretty great. I think it could be hard to combine them, and the author did a great job of using both. The cover art is terrific.

What I did not like was that they adjusted to land so easily. It seemed like since they lived in the water their entire life they should be a little more clueless. I also would have liked a little more information in the big ending mission.


I can't wait to read books two and three. I recommend this book for anyone who enjoys fantasy and sci-fi.