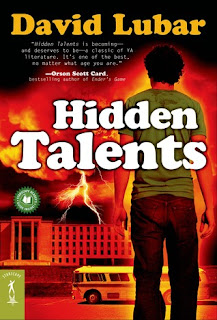 I found these sci-fi books by browsing at my public library, and the title and cover art caught my attention. In the first book, Hidden Talents, Martin starts at Edgeview Alternative School, and makes new friends. After reading a book, he eventually realizes that he and his new friends all have special powers. They use their powers to help the school not be shut down, and survive the other kids who are worse than they are.

In the sequel, True Talents, it has been about a year since they all left, and have headed their separate ways. Martin and his friends are brought back together when Eddie, (nickname "Trash") accidentally shows his telekinesis, and is taken away by an evil man who wants to use Eddie's power to his advantage. Torchie, Cheater, Lucky, Flinch and Martin come together to free their friend and stop a group of criminals.

I thought the first book was better than the sequel. I felt that the first book, Hidden Talents, was a good book, although it went kind of slow. The book was half over by the time they all figured out their talents. I liked how Martin behaved, and I thought Martin did a good job narrating the book. All the events that happened were necessary and important. The flow between chapters was smooth and together. I also think that if the book was longer it would not need a sequel.

The sequel, True Talents, I felt was not really worth my time of reading. The narration alternated between characters, and at times I did not know who was narrating. The plot seemed all over the place, and not really organized. I don't even think it was worth it to make a sequel. I did like the idea of revisiting them a year later, but I think I would have liked it better if it described more of their private life, and I would have really liked more time of when Eddie was reunited with his parents.

I think it is a good idea to read the first book, but don't waste your time with the sequel.

Email ThisBlogThis!Share to TwitterShare to FacebookShare to Pinterest
Labels: 3 Stars, Middle Grade, Science Fiction
Posted by pagesforthoughts at 11:00 AM