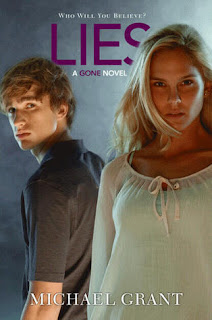 Lies is the third book in the young adult dystopian series, Gone. Seven months ago, everyone 15 or older vanished, leaving the kids trapped inside the FAYZ. (Their word for the mysterious barrier surrounding them.) Sam and his friends thought that they had defeated the darkness, but they are wrong.

Drake is back from the dead to finish off Sam, and that is the least of their problems. A girl named Orsay claims to have the power to hear and see the adults outside the barrier, and communicate through their dreams. Sam and Caine found a way to stay after your 15th birthday, but she says that you go on the other side and are reunited with your parents. She also says that death is a way out, which causes chaos.

Lies is definitely a super third book. It was kind of alarming how quickly things spiraled out of control. The second one problem was solved, another happened. Nobody could rest, and some never slept. It was also a prime example of how power can go to your head, and how things can't just appear overnight. That caused a lot more trouble than it should have.

A good thing that happened was that there was two pages told from Sam's mother's perspective about life without the kids. That completely changed my entire outlook of the series, but I just wish that had happened sooner. I also felt that there were too many characters, but it did not really affect the book as a whole.

The Gone series keeps getting better, and I cannot wait to read the next book in the series, Plague.