The Pitcher by William Elliott Hazelgrove 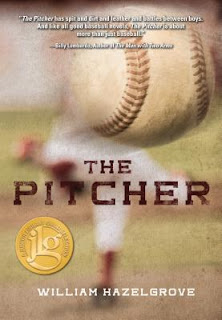 The Pitcher is an inspirational realistic fiction book for young adult readers. Ricky is Mexican, and he is constantly teased and called racist comments. His mom has lupus, and they don't have enough money for her to get the treatment she needs. It doesn't help that his abusive father comes back just to steal the only money they have. Yet, when Ricky discovers that he has an amazing arm that can throw a ball 74 mph, his mom uses all the money that they have to get him to play. Across the street, a former World Series player, Jack Longford, is living in his garage after his wife died. He eventually agrees to coach Ricky.

The Pitcher teaches about believing in yourself, and moving forward even when things get rough. Ricky has it hard, but he keeps going. This is an emotional book, and it shows that anything is possible if you put your mind to it.

You don't need to know anything about baseball to read the book. All the terms and expressions about baseball are explained. I was a little worried about that, but it was not a problem at all, so I was pleasantly surprised.

My only complaint is that Mr. Longford uses way too much inappropriate language. The guy calls everyone a rockhead, and says the same three cuss words tons of times in the book! He is a very strong character, but maybe a little too much.

I recommend you read this young adult book if you don't mind all the cuss words.