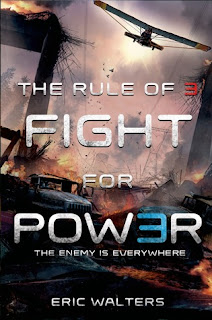 Fight for Power is the second book in the YA dystopian trilogy, Rule of Three. Adam is a changed person. Flying an airplane in battle zones and seeing dead people have changed him, and he doesn't like it. When he sees other people, especially kids, he tries to help. When there are attacks in the outside world, the community is left with hard choices. Adam wants to be nice and trust people, but sooner or later he is going to have to learn the hard way to be careful about who you trust- especially when the real enemy is actually inside your walls.

I feel bad for Adam in Fight for Power. He is having a really hard time in this book. He is being underestimated by Herb and the other people. He wants to continue being human and help people every chance he gets. He has to decide if it's worth harming others to be safe. Unfortunately, he doesn't get that say.

This book is definitely more sad than the first one, but I sort of liked that, as the mood fit the situation. I did enjoy the plot and the pace. It flowed perfectly and I liked that this book was more about surviving. Survival is complicated, and it was a very suspenseful story.

However, I did want them to try to investigate more about the cause of the electromagnetic pulse and how to get everything back to normal. They just were fixating on fighting and preparing for the rest of the future. Well, if they fixed the power problem, then they wouldn't have to worry so much about the future! I thought that the characters had no hope for things returning to normal. I also thought there was too much fighting.

I did not like this book as much as the first book, but I do recommend reading it, and I look forward to reading the final book, Will to Survive.

Read my review of the first book, The Rule of Three.