How to Beat the Bully Without Really Trying by Scott Starkey 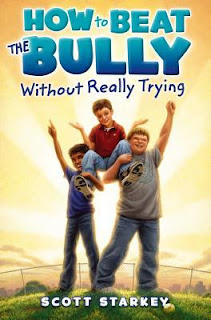 How to Beat the Bully Without Really Trying is an easy middle grade book that I have owned for many years since my fourth grade teacher gave it to me as a gift. Rodney Rathbone is scared of everything, and he freely admits that. He was bullied constantly in New York, and while he is excited to leave Rocco's bullying, he is scared of moving to Ohio. On his first day, Rodney encounters Ohio's version of Rocco- Josh.

However, luck is on his side. Just when Josh is going to beat him up, a baseball comes flying in and knocks out Josh. Everybody thinks that Rodney did it! Soon he is the most popular kid in school. He must try to live up to his new reputation.

One thing that I enjoyed was how funny the book was! All the random things that happened were very funny to read, as well as to see the reaction of the people he beat! However, I thought that Mrs. Lutzkraut's character was exaggerated.

I also thought that there were a lot of coincidences that were surprising. There were a lot of twists and turns in the book, but it still flowed nicely and was still focused. I think that the approach to the bullying that was taken was more amusing than serious. I would advise readers to not approach handling bullying in the way that this was. I was disappointed that the adults in the book were not helpful in the situation.