The Revenge Playbook by Rachael Allen 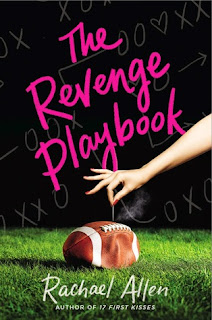 The Revenge Playbook is an inspirational YA realistic fiction book about equality and revenge. Football players at this school are treated like royalty, and four girls have had enough of it. Peyton is tired of preferential treatment in her geometry class. The teacher even lets them correct their tests! Ana was taken advantage of at a party. When she told the guidance counselor, she told her to not risk him being kicked off the football team! Liv and Melanie Jane were dumped by their boyfriends because their teammates told them to. They come up with a plan to steal the most important thing to them in return for getting rid of the inequality.

Each chapter alternates. One chapter is about the scavenger hunt and stealing the football, and the other chapter is the background stories and prior events. I like how the author did it, but I would have wanted to switch the order. The first chapter was about getting revenge, but without any background knowledge.

This book is inspirational. It deals with self-confidence and standing up for yourself. It showcases empowerment in girls. The Revenge Playbook also deals with bullying and what to do in certain situations.

The characters were interesting and fun to observe. I enjoyed the struggle with Melanie Jane and Ana. They lost their friendship long ago, and it was nice to watch them try to be friends. Peyton was very brave and spoke up about geometry class, and I liked her bravery and determination, especially at the end.