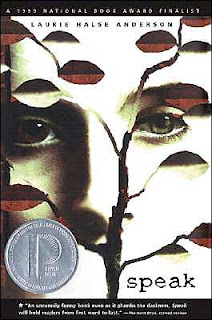 Speak is an inspirational YA book about speaking up for yourself and finding your voice. When Melinda starts Merryweather High School, she is alone and an instant outcast. On the last day of summer, she called the police on the biggest party ever. Nobody knows why she called the police except her. Since she has not told anybody what really happened, nobody will talk to her, and Melinda barely talks at all.

She goes through her freshman year hiding behind silence and the comfort of a hidden janitor's closet. Her grades are worse than ever, and her teachers do not like her. The only thing she likes is art. In art, she can express herself without saying a word. An art project helps her face what really happened at the party, and maybe speak up.

This book is pretty popular, and I had been meaning to read it for a long time, but I never got around to it. I wish I had read it sooner! I loved Melinda. She was an easy character to connect to, and the book was like reading the thoughts inside her head. There were so many details and explanations for things.

I liked the format of the dialogue in the book. Most of the dialogue was like a play, and was like lines in a script. What I liked was that there were no quotation marks. While that is not how you normally are supposed to write dialogue, it really worked for the book. I think that it relates to a theme of silence about not having them. It would have been cool to see them being used at the end, to symbolize her speaking.

Melinda's parents were constantly mad at her and yelling to her about her grades. I wish just once the mother would ask if she was okay. Geez lady, your daughter stops speaking and you do not ask what is wrong? That made me mad at the parents, but in a way that was a really good thing. I really love characters that make you feel a certain way about them, especially anger.

The one thing that annoyed me was that the huge event where she finally can speak up was too short. I felt like the book should have been longer. The pace was strange. It moved too fast and too slow at the same time. This made it a really interesting book to pay attention to, as I suspect that the pace was strategic. A lot of things in the book seemed carefully planned.