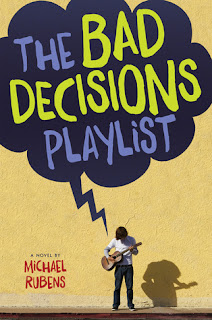 The Bad Decisions Playlist is a YA realistic fiction book about chasing your dreams and making good choices. Austin Methune has always wanted to be just like Shane Tucker, a famous musician. Ironically, Shane shows up and announces that he is Austin's father. They are alike in more ways than one. They both have a bad history of doing stupid things and being irresponsible.

Austin hopes that with Shane around then he can have the chance to turn around his life and help make his dreams of music come true. That opportunity shows up a lot sooner than he thought, but only the second part. The first part, turning around his life? Not so much. It turns out that being famous has more responsibilities than he thought- and full of decisions for him to screw up.

Austin's character was very isolated and I could not connect with him. He was a little too far away for my reach. He was a horrible friend and as much as he knew it, he did not want to change. He did not realize that there are consequences for your actions, and he wanted to grow up too fast. I would have liked to see more emotions from Austin. I wanted to yell at him for how careless he was being. I also did not enjoy the amount of romance. I felt that some of the scenes were a little too detailed, and steered away the focus. Speaking of the focus, I really liked the music! I thought the lyrics were really good.

The inspiration piece of the story is the difference of dreams and reality. Sometimes, you have to put aside your dream and do the essential stuff to get there in the first place. Austin wanted to jump ahead. Unfortunately, that happened for him. Shane was a huge influence on Austin. Shane was everything that Austin wanted to be, at least, all that Austin saw. He was so caught up in hope that he did not see the heartbreaking truth in who he was and why he really cared about Austin. The book teaches about focusing on reality and not getting carried away by hopes and dreams.

I recommend that you read this book.