At the Edge of the Universe by Shaun David Hutchinson 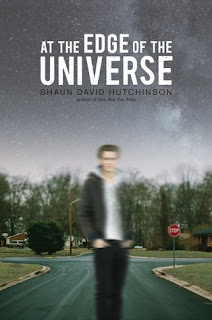 At the Edge of the Universe is a YA science fiction book about moving on and letting go. Tommy and Ozzie have been dating since the eighth grade. One day, he was there. The next day, Tommy ceased to exist. Or more accurately, nobody can remember him but Ozzie. Not only is finding Tommy a huge priority, but Ozzie also has to deal with going to college, his parents' divorce, his brother going to the military, and his best friend becoming distant. He also has to deal with his developing feelings for his lab partner Calvin and a troubling secret. Furthermore, Ozzie suspects that the universe is shrinking. As more and more people begin to disappear, Ozzie must come to terms with a part of his past before his whole universe is (literally) gone.

Ozzie is very loyal and determined. He would do anything for Tommy to come back, and I loved that he persisted despite people saying that he is crazy. He also is loyal to his friends and family. Even after falling in love with Calvin, he wants to be respectful to Tommy. Ozzie had a lot of pressure on his shoulders. For one thing, his home life is not so great, and his boyfriend is gone. His "new boyfriend" is hurting because of a terrible secret, but he cannot tell anyone.

Ozzie tells a lot of crazy analogies and uses a ton of figurative language to express his thoughts. He is incredibly smart, and uses weird facts to convey ideas. He likes to go a little off topic in his thoughts, but it is amusing. There are a lot of diversity and cultures in the book, and a lot about LGBT.

The idea of the universe shrinking was a nice twist. I thought it was hilarious when states and countries fell off the map. I am not crazy about the ending because it does not exactly make sense, but wraps up the story nicely.

Warning: this book contains some mature scenes and subjects. This book is recommended for older YA readers.