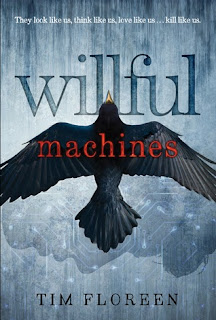 Willful Machines is a YA science fiction book that I discovered from reading another book review blog, The Tales of the Ravenous Reader. Christy wrote an incredible review that inspired me to read this book!

Scientists create Charlotte, a robot with artificial intelligence. Things go well at first, but then Charlotte escapes. She transfers her brain into the internet and attacks the United States, demanding equal rights and for the other robots like her to be released from government captivity.

For the President, this is a nightmare and a disaster. For the President's son, Lee, well... whatever. Lee has other things to worry about, like the secret service following him everywhere and giving him no privacy. He has other things to worry about, like trying to prevent his dad from knowing that he is gay and likes another student. But when that student, Nico, is revealed to not be who he says he is, Lee realizes that Charlotte has plans for him and his family. He must decide who to trust and follow his heart.

The concept of the book is "what makes us human?" If somebody was in a bad accident and they had to get tons of robot parts, are they still human and protected by the law? When you google the word "human," there is no real definition. The main point why Charlotte was rebelling was because she wanted rights. The scientists created her to be like a human, and she got mad because she was not being treated like one. They gave her life, but took away what makes life worth living. Charlotte may be a robot, but she still counts as a character. And I say that her motives make sense. In the future when artificial intelligence becomes more prominent, human rights debates will increase dramatically.

One thing that sort of scares me is the fact that even though we have not made huge advances in this technology yet, it is highly probable that the future we see in this book could come true! This concept in books is very common, such as Revolution 19 or Bot Wars. But this is the first that I have read where the plot seems more realistic. There is even LGBT romance in this book. Being the son of the president makes it a cool book, regardless of robots. The robotics just takes it to the next level.

I want a second book!!! After this ending, I am craving a second book, but there is not one yet! There is a new mission revealed in the ending! There was the biggest cliffhanger in the world with Nico. Luckily, on Goodreads, the author responded to a question about writing a sequel with, "I do hope to write a sequel at some point--though to be perfectly honest, I'm not sure when that'll be."  So, in the meantime, he also has a book out called Tattoo Atlas, which is a similar concept.