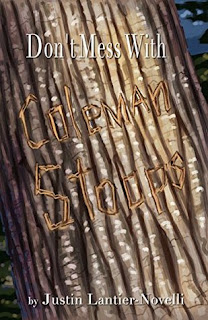 Don't Mess with Coleman Stoops is a new middle grade realistic fiction book that I received from the author. Coleman is the least popular kid in school, and the target of everyone's jokes. He's that overweight kid that raises his hand to every question and the kid that you catch picking his nose in the cafeteria. His last name is Stoops; the kids call him Stoopy. He hates that even more than how he hates himself for always finding a way to embarrass himself and play into their jokes.

So the last thing he would ever expect is for Trey, the most popular kid in school and the most mean to him, to want to be friends. He also claims that he wants to set him up with his cousin, Faith. Ignoring his gut feeling, Coleman agrees to do as Trey says, but he can't get rid of his suspicion that Trey could be tricking him.

The point of view was very unique and refreshing. Don't Mess with Coleman Stoops is told by a bystander, watching the events unfold. I like this because it eliminates all bias and shows an accurate representation of how his peers view him. This is not very popular, and I enjoyed something different.


Coleman is a very determined character, and he always does the right thing. Sure, he's gullible, but he doesn't let it bother him too much. Yes, he hates himself for jumping right into their traps, but he doesn't let that get him down. Instead he ignores them and still remains himself. For a sixth grader, he has the maturity of an adult. This felt strange at times, due to the fact that he is only 12.

The book is also an accurate representation of sixth grade. This is a great book for all middle school students and is very relatable! It shows the adjustment to middle school and demonstrates social classes very accurately. I remember in sixth grade having to get used to the idea of "popular" kids and cliques. This is a must-read for incoming sixth graders!

Don't Mess with Coleman Stoops is scheduled to be release on August 29, 2017. I recommend that you read this book!

Email ThisBlogThis!Share to TwitterShare to FacebookShare to Pinterest
Labels: 4 Stars, Middle Grade, Realistic Fiction
Posted by pagesforthoughts at 10:00 AM