The Hands of Ruin (Book 1) by Dylan Lee Peters 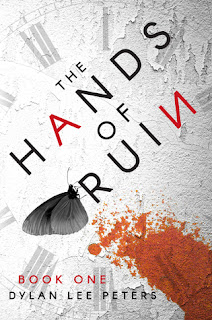 The Hands of Ruin is a YA scifi/fantasy book sent to me by the author. In a futuristic society, social classes are divided into different counties, all separated by huge walls. After Zigmund and Zerah's parents died, they are sent to live in a rich community with their uncle Rainart. Quickly the twins realize that their uncle is not what they thought. He possesses a type of dust called zulis that can give people magical powers from a planet called Ferren.

While Zerah learns to use her newfound powers, Ferren is facing a major and unusual threat- dark butterflies that completely destroy with a touch. Chapters alternate between the stories of Ferren and Earth.

The two stories don't overlap until the end but are equally fascinating. The imagery was out of this world and crystal-clear. Both worlds and their characters were thoroughly developed and diverse. The background knowledge was immense, leading to complete understanding of the plot and setting. The premise of the butterflies was unique, and I have never read anything like it! The tone changes frequently and keeps the reader's emotions on edge. The book ended with a major cliffhanger that topples both worlds, and I was sad when it ended!

I highly recommend that you read this book! I can't wait to find out what happens in the next book, The Hands of Ruin (Book 2)