My Lost Brothers: The Untold Story of the Yarnell Hill Fire's Lone Survivor by Brendan McDonough with Stephan Talty 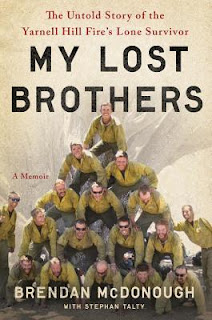 After watching the movie Only the Brave, I was eager to read My Lost Brothers, the memoir that inspired the documentary. Brendan McDonough was on lookout duty when the rest of the Granite Mountain Hotshots were burned alive on June 30, 2013. The Yarnell Hill Fire turned 180 degrees, cutting off their escape route. Their emergency fire shelters were no use against 3,000 degrees, and they all died in minutes. This was the greatest loss of firefighters since the 9/11 attack. My Lost Brothers is an inspirational memoir of how Brendan escaped the streets and turned his life around by joining the Granite Mountain Hotshots, and the day he lost the 19 men who saved him.

Before watching Only The Brave, I immediately went on the computer and read all about it, unaware that the crew was going to die. After realizing that Brendan wrote a book, I knew I just had to read it!

The majority of the book was in perfect unison with the documentary. This inspirational story teaches how to find one's purpose in life, and shows how millions of firefighters, police officers, and other first-responders put their lives on the line to save others. My Lost Brothers also teaches strength in the face of tragedy, and displays the importance of acceptance and moving on. This is a great book for someone who has faced death or PTSD, or knows someone who has. I learned a lot about the values of family and determination. I now also know more about firefighters than I ever did, and I have a stronger admiration for them. This book is heartbreaking and dramatic, and honors the men who died saving others.

Even though this book is intended for adults, it is perfectly suitable for teenagers as well. I highly recommend that you read this book and honor the sacrifice of these 19 brave men.