Out of Darkness by Ashley Hope Pérez 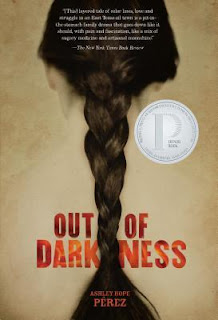 Out of Darkness is a YA historical fiction book telling a story of love, racial tension, and tragedy in a backdrop of the New London School Explosion in 1937, the deadliest school disaster in American history. In East Texas, there are three rules on every sign in every store; No Negroes, Mexicans, or Dogs. Naomi Vargas is Mexican. Wash Fuller is African American.

An unlikely relationship blossoms between them. Their plans to be with each other and escape to Mexico are interrupted by the school explosion and Naomi's racist step-father who wants her all to himself. Soon in the face of tragedy again, Beto, Naomi's little brother, will take to the world and tell the true story of what really happened in all those fateful weeks, not the fake version the newspapers and white people created.

This is historical fiction, and while the characters' specific story may not be true, it is based on the truth. The author took an awful event and made it even sadder by bringing attention to the controversy and racism surrounding it. Tragedies like the ones that happened in this book we all know that in some form, they did happen in that time period. And we as a species still deal with racism and prejudice today. Out of the Darkness is a strong wake-up call to the darkness inside humanity and makes us reflect on who we are and the choices we make every day. The racial prejudice was true and strong, and this book pays tribute to those who could not speak their minds or tell the truth based on society. And we all sadly know that this fate was true somewhere, sometime in the world.

The book is also just beautiful. I cannot think of a single other word to describe the way the words flowed and carried the spirit, the love between the characters, the aura around them. The story was a beautiful, romantic tragedy. The ending made me cry, and I was also angry, but at the same time appreciative and grateful for reading this type of story. Out of Darkness will be the saddest book you have ever read. But the story is so sad that it must be told. I highly, highly recommend this book.

Note: This book should be advised for only older readers given certain scenes of violence and mature actions, especially near the end of the book.