Everybody Sees the Ants by A.S. King 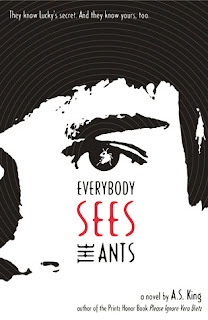 Everybody Sees the Ants is a YA magical realism book about a boy who goes to another world in his dreams. Lucky Linderman is bullied and tortured by a fellow classmate, whose abuse goes too far. After his grandfather never comes home from the Vietnam war, his father is a ghost, and his mother barely knows him. While reality falls apart all around him, in his dreams he can escape to a prison camp in Vietnam and speak to his grandfather, who teaches him how to stand up for himself and take back control of his life.

The author also wrote Reality Boy, which I enjoyed very much. Sadly, I was very disappointed by this book and failed to understand and appreciate the story. Multiple things about this book irked me. Everybody Sees the Ants also switched chapters between the past school year and the present summer. I felt confused as to the setting and timeline of the story.

He also references a lot seeing ants jumping up and down, cheering, and speaking to him. I am still not sure if he is schizophrenic or just has a very detailed imagination. I also was not interested in the magical dreaming part since it was not explained very well. His dreams were referred to as dreams, not reality, but when he wakes up he is wet or covered in mud. It was not clear if he was actually traveling/teleporting there, sleepwalking, or dealing with a mental coping mechanism.

The book overall was quite boring for me. It did not feel like the story went anywhere or accomplished anything. I just didn't get the point. Similarly to how Lucky is lost in his jungle world, the book was lost, as well.

I don't recommend this book.