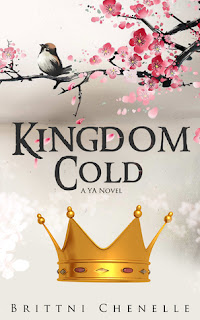 Kingdom Cold is a YA fantasy novel about a Princess' transition from spoiled and pampered to a brave warrior queen. This book was sent to me by the author and is released today!

An arranged marriage to Prince Young is the last thing that Princess Charlotte wanted. But when her kingdom is under attack and her mother renegotiates the marriage to save the kingdom, Charlotte is stuck with a murderer for a husband. She'll just have to learn to fight and use her smarts to take back her kingdom and marry Young instead.

Ultimately the characters will suffer grief and loss as they fight to survive. Simultaneously, the characters also unravel what it means to love someone- not for their political power, but their personality and who they are as a person, and how to find the sliver of hope in every situation. I adored watching Charlotte evolve from being spoiled, moody, and whinny to blossoming into a courageous leader and protector. I love how she never gave up on what she wanted

The romance felt real and gradual without any cliche's. It was an extremely diverse set of characters, and I enjoyed the multiple POV's. I was fully engrossed in the setting of their world and I thoroughly enjoyed this quick read! I hope that Chenelle will eventually write a sequel to the story because the epilogue, in my opinion, was quite a leap and did not suffice to put to bed the surprising ending. But I love that there is not always a happily-ever-after, which made this book feel more realistic.

Email ThisBlogThis!Share to TwitterShare to FacebookShare to Pinterest
Labels: 5 Stars, Fantasy, Young Adult High School
Posted by pagesforthoughts at 6:30 AM