Be More Chill by Ned Vizzini 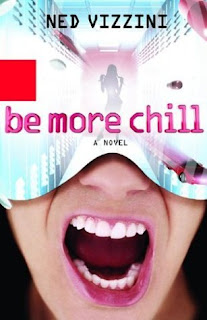 Be More Chill is a YA science fiction book about a boy who swallows a computer. In 2015, it was made into a hit Broadway musical. Jeremy Heere is the opposite of popular and is teased every day. He desperately wants to gain the attention of the girl he likes and be cooler. So, he swallows the Squip, a tiny computer that will instruct him how to be a better, more popular person. However, even a computer might not have all the answers his society wants.

I initially thought it was a funny concept to have a computer in your brain, but the scifi aspect was extremely underdeveloped and downright idiotic at best. I hoped there would be an inspirational feel to it where all the characters learn a big life lesson about how it's best to be yourself, but I was totally wrong and this ended up being one of the worst books I've ever read in my life. I am shocked at how in the world this got made into a musical on Broadway!

First off, it portrayed girls in an incredibly sexist way and basically treated girls like a toy or an object to have fun with. I was appalled and I am extremely proud that I even finished the book. Some pages were extremely uncomfortable to read and made me horrified and outraged. As a woman, I was personally offended by this book's messages of women being nothing more their bodies. There are no moral values of any kind present in any characters. They are extremely hypocritical and homophobic- they treat the idea of gay people as worst than terrorists.