A Shifting of Stars by Kathy Kimbray 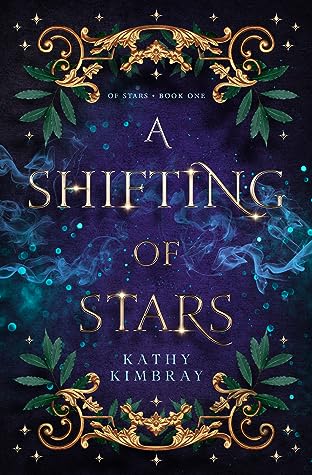 A Shifting of Stars is the first book in a YA fantasy series sent to me by the author. In Meadow Sircha's kingdom, talk of rebellion or dislike of the sadistic Emperor results in a death sentence. However, dislike of the Tyjans is quite automatic as he neglects his citizens and forces them to fight to the death in his tournaments. After the 17-year-old's mother dies because the Emperor would not give her the medicine needed, Meadow speaks out, asking the villagers to boycott. When she and her father are captured, Meadow barely escapes with her life and journeys across her kingdom to find him, ending up in more trouble than she bargained for.

A Shifting of Stars has an amazing cover that captures the magical and somewhat tragic fates of the characters. Meadow faced plenty of tyranny in her life, but her I love how she was still afraid and angry at it. Meadow is very brave and modest, feeling powerless to help her people but trying everything she can anyway even with her anxiety. Vogel was my favorite character. He was beguiling and battled internal demons. He was darkness and Meadow was light, they balanced each other out. Their romance was beautiful and felt very realistic.

The torture shown was very vivid and evil. The plot surprised me and quickly threw me off course. The magical twist was fascinating and opens a whole new realm of possibilities. The ending was lovely and exactly what I wanted. However I wanted more clarity on how the magic spells worked and where they came from, and some of those scenes were bizarre and not explained.