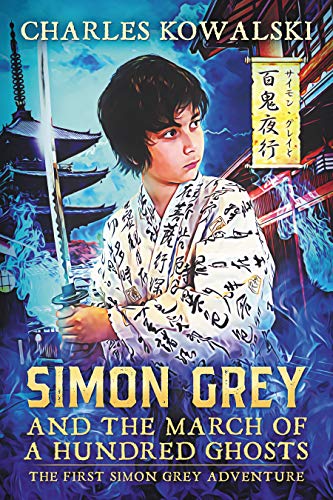 Simon Grey and the March of a Hundred Ghosts is the first book in a middle grade series with a creative mix of historical fiction and mythology. This book was sent to me by the author and will be released in two weeks on August 1st.

In 1620, Simon Grey has always been able to see ghosts and spirits. Desperate for them to stop haunting him, Simon boards a ship set for the spice islands, but crashes on a Japanese coastline instead. He soon learns that he can see yokai, spirits and shadows- not just ghosts. He also learns that an evil sorcerer and shogun want to steal his ability to gain immortality, and must learn to fight back to free his friends and his life.

I learned briefly about yokai in my A.P World History class when we discussed animism and the Edo Period of Japan, and I was excited to learn more about them! I loved the historical accuracy of the story, like including the Sakoku Edict of 1635 and their war on Christianity. I found this book very educational on Japanese folklore, but fun and light at the same time. I enjoyed the very imaginative concept that provided lots of entertainment!

I found many of the scenes very funny and mystifying. The adventure continuously raised the stakes and I was anxious to find out the ending! Simon was a sincere narrator with tons of character development. He goes from feeling alone and expressing hatred for his ability to appreciating the need of it to save his new friends. The story is very empowering and can teach young readers to embrace who they are.