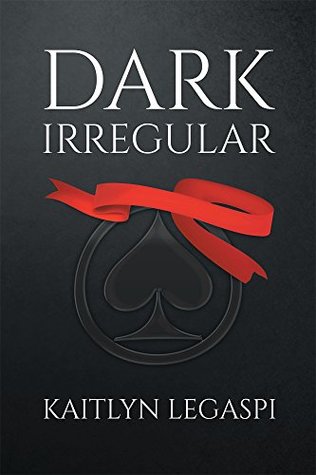 The Dark Irregular is the first book in a YA fantasy trilogy. This book was sent to me by the author. While previously published in March 2017 by Page Publishing, in one week on November 1 the author will be self-publishing it.

In a world of fantasy, humans, elves, and spirits roam. But there is also the Void, where shadows and irregulars live. Those shadows attacked the royal family, killing the queen but sparing her newborn daughter- Kanna. Years later when the innocent orphan turns 15, Kanna is invited to the palace to train as a magical apprentice. This excitement soon turns to mystery when the dark shadows attack her everywhere she goes- ultimately endangering somebody Kanna cares about and forcing her to make a life-altering, sacrificial decision.

Kanna has a kind-hearted, strong spirit that blew me away! I love how her confidence increased drastically over the course of the novel. I also enjoyed how Kanna opened herself up and became more friendly and willing to trust others and have friends for the first time. Her selfless acts to help Kenneth were inspiring and shocking. Her bravery, as well as her emotional outbursts, were extremely realistic and relatable. In association with her tenacity, I saw a lot of myself in Kanna and eagerly hoped for her success and well-being.

The fantastical setting was really cool and I enjoyed the sharp contrasting imagery of the magical beauty of nature compared to the darkness of shadows. I also liked the clear presence of a climactic event. The mystery surrounding the Irregular kept me intrigued until the end. And unlike my original predictions of him being an evil demon of some sort, I feel sympathetic to him and look forward to further exploring his complexity in the next book.

I highly recommend this book! The next book is expected to come out in February 2020.