Legacy (Keeper of the Lost Cities Book 8) by Shannon Messenger 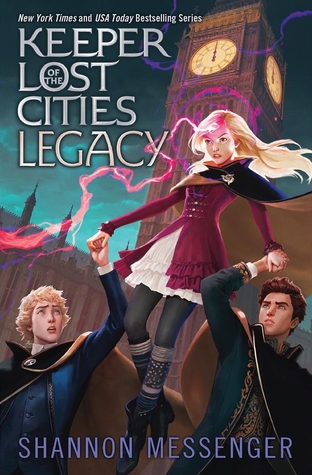 Legacy is the eighth book in the middle grade fantasy series, Keeper of the Lost Cities. Sophie Foster is tired of endless secrets and is determined to uncover the truth about her family and her friends' legacies. As the Dwarves land in danger and Keefe ultimately launches headfirst into his destiny, Sophie must face that some mysteries might be better left unsolved.

My favorite element of Legacy is the involvement of more characters shown in different lights. Messenger has a true talent for world building with dozens of characters emphasized in balanced amounts of attention and value. In addition, I love how Messenger is able to shock me with plot twists and revelations that are extreme but also believable.

Stina had extremely interesting character development because now she is no longer simply a "mean girl" or an enemy but an alliance with a developing friendship. I also enjoyed the greater role of Maruca and other previously backseat characters. Keefe's mom has always been a mysterious villain in the sense of her devoted love for her son and righteous points of view, and her development and plan by the end was rather shocking. The introduction of Glimmer as a character is fascinating and mysterious, and I cannot wait to see what Messenger has in store for her in the next book!

I also really liked the further development of Sophie's inflicting ability. In addition, I am so happy that one of Sophie's genetic parents is revealed! As usual, Messenger wrote an incredible cliffhanger and I cannot wait to read the ninth book when it is released next year! I started reading this series back in seventh grade and it amazes me that in next November when the ninth book comes out I'll be in college already! This is a series I will always keep with me.


I will say that I did have a few issues- primarily the pacing. For 800 pages, the huge climactic event at the end seemed too short and fast paced while other parts, like the beginning of the book, were slow and drawn-out and had the potential to be removed. While I do have tremendously high standards for Messenger as this is my favorite series, I love some of the previous books, like Neverseen, more.

I recommend you read this book!

Read my previous reviews of books in this series here.

Email ThisBlogThis!Share to TwitterShare to FacebookShare to Pinterest
Labels: 4 Stars, Fantasy, Keeper of the Lost Cities, Middle Grade, Series
Posted by pagesforthoughts at 8:00 AM