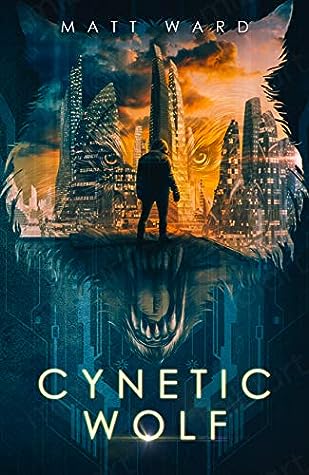 Cynetic Wolf is a YA dystopian book that will be released next week on March 26, 2020. I received this book from the author. In 2096 after a bio-plague wiped out the majority of the population, humanity has fractured into multiple subspecies of immortals, cyborgs, enhancers, and half-animal hybirds, like Raek- part wolf, part human. He lives with the extreme inequality and brutality from the world's government until his little sister is killed. Then, he joins the resistance.

This story was equal parts tragic and empowering. Raek's courage is extraordinary. There was lots of violence and some gruesome scenes, however Raek has such a big heart that it overpowered some of those scenes of his desperation. Raek is a tremendous, natural leader who has the world's best interest at heart. Over the course of the novel he realizes that there is no such thing as a fully equal, peaceful society- but that doesn't mean he will stop trying.

While the world created in this story differs immensely from ours, their societal values and inequalities ring true, like the cycle of poverty with unequal access to education, and the heavy values of greed. I appreciated finding those connections to "real life". The huge battles near the end felt like a Dwayne Johnson movie! The plot kept changing and almost nothing is predictable! The ending was shocking and heart-wrenching- I don't know how Ward will be able to top it with the next book!

I recommend this book and cannot wait to read the next!