A Summer Taken (Council of Friends Book 1) by Jason Milgram 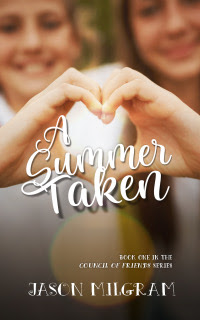 A Summer Taken is the first book in the Council of Friends series. This YA realistic fiction book was sent to me by the publisher. It is 2041, and 14-year-old Julia must return to Camp Auctus to write a speech honoring her cousin Lizzie, who was shot two summers ago shortly after leaving the camp. But Julia is still struggling with her shyness and feels lost without Lizzie beside her. This summer, Julia will find the words to express the vast range of emotions bottled inside her and find the strength to speak for change.

I enjoyed the story and Julia's character development over the course of the novel. Readers see her initially shy and reclusive, torn apart over her cousin's murder to being an inspiring force for change in gun violence laws. Milgram was skilled at depicting the stages and the complicated range of emotions one experiences while grieving a loved one, like anger, guilt, numbness, and sadness. The added element of Julia's struggle with anorexia only made it more insightful. A Summer Taken also explores common obstacles that occur in friendships. This book could teach one to become a better friend. I was impressed with the level of detail and imagery in some of the flashback scenes, and how the book still had a nice flow despite alternating from the past and present.

One of my concerns, however, would be that setting the book in 2041 was strange and somewhat distracting from the plot at hand. I understand that it draws attention to the fact that gun violence is still an issue and will still be for many decades, however there was not much in the story that made that year make sense. The only cue that it didn't take place in 2020 was one talking typewriter. I was hoping for more creative integration of the future setting.

Despite my issue with the setting, I do recommend this book! The second book, A Summer Remembered, will be released in October 2020.