Heir of G.OD. by Harper Maze 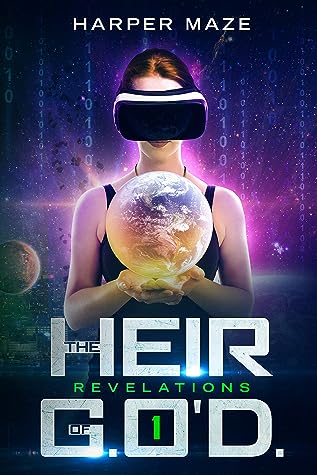 Heir of G.OD. is a YA science fiction book that was sent to me by the publisher. After fracking caused an enormous earthquake that triggered a volcanic winter, humanity plunged into sickness and depression. Gary O’Drae then created Sol, a virtual reality world. This allows Ana, secretly blind, to see. But Drae put an expiration date in Sol, unless his child comes forward. Faced with the reality of her blindness, Ana must take extreme risks to find someone who can help her see in the real world, which puts her directly into the path of the Church of G.OD. and their mysterious intentions.

For a science fiction book, the premise is extremely realistic with the environmental disasters that fracking caused and the turn to virtual reality as a result. Heir of G.OD. managed to be educational as well, driving home the point about the dangers of fracking and ignoring scientific warnings. There is a glossary at the end, which appeared useful at times. The description of Ana being blind was heart-wrenching, and Heir of G.OD. shows the extreme risks one is willing to take to save their life.The ending provides an intriguing premise for the second book which would completely change their world.

It was very fast-paced, and my critique is that I wish it could have slowed down and expanded some parts. Often two or three arena battles could be covered in the same page, and I wish the most important ones could have been further described. I also wish there would have been an explanation for why the blind are persecuted, and the storyline was rather predictable. Despite these concerns, I did enjoy reading it!

I recommend this book, and I am interested in reading the next book.

If you are interested in this book, I recommend you read Warcross!