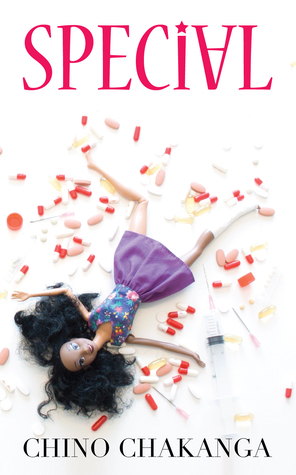 Special is a YA fantasy novel that was sent to me by the author. In a world where everybody has superpowers, Hope does not. Her medical mystery leads to tons of surgeries and research studies desperate to "cure" her, while society treats her as inferior, Hopeless, a maladroit. As Hope struggles to find self-confidence, she is thrust into the plot of a fellow classmate who is resorting to extreme measures to gain equality- and Hope might be the only person who can stop him.

Special is one of my favorite books that I have read in a long time. Rather than the popular topic of the protagonist struggling with having powers, Special explores the opposite with a girl who is struggling in a world where everyone has powers but her. Similar with taboos on those with mental illness or learning disabilities, Special touches on modern-world injustices and biases against those who are "less" than others, as well as the extreme lengths one will go to gain equality. What is so inspirational in this story is the message that nobody is hopeless; everybody has a purpose and can rise up to overcome anything if they can believe in themselves. Once Hope accepts who she is, she breaks down every wall put in her way.

I love the doll on  the cover because Hope has been a doll for years, being poked and prodded with dozens of surgeries. But over the course of the book, Hope regains her independence and confidence, no longer only being a doctor's toy. Another impressive thing to note is the connection to autism and those on the spectrum. Hope has Ability Dysfunction Spectral Disorder (ADSD or AD). There is also a subset called "High-Functioning AD". Sound familiar? Autistic people are four times as likely to experience depression. Hope goes through a really dark time and struggles with depression and feeling hopeless. Special dives deep into mental illness, too, even also touching on opiod addiction. Chakanga is skilled with being concise with her word choices while still being powerful.

I highly, highly recommend this book!