Losing It by Erin Fry 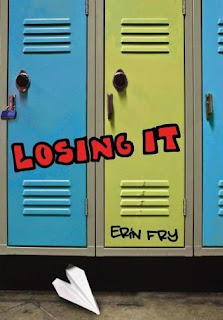 This is a great realistic fiction book for teens. Bennett Robinson lost his mother to cancer when he was five, and to cope, he and his dad watch baseball. Bennett is a huge Dodgers fan, but doesn't think that he could ever play, because he is so overweight. He is so overweight that he sweats just getting off the couch. One day while watching baseball, his dad has a stroke because of his weight, and Bennett doesn't know if his dad will live or die. With no other family members, Bennett is forced to move in with his Aunt, who is personally taking up a new role- to help Bennett lose weight and be healthier. At school, Luis and his gang take a special interest in bullying fat kids. Tired of it all, Bennett decides to put his fate in his own hands, and with determination to help his dad and put the day-to-day struggles to a stop, he joins the cross country team.

One of my favorite things about Bennett is that he doesn't give up. Instead of thinking that his dad will die, he puts all his energy into helping him get better. Instead of giving in to Luis's insults and demands, Bennett just does his best to ignore it. And most of all, when his legs hurt like they're going to fall off, or when everybody tells him he can't do it, or when he just wants to give up and go back to bed, Bennett doesn't! He keeps going, even when it seems that it can't get any worse. It takes a lot of self-esteem and courage to do what he did, and that should be admired.

Losing It expresses that you can't give up, and you can do anything that you put your mind to. It showcases a lot of things that happen to us, and I believe that this book could motivate or help people just like Bennett. I very, very, very strongly recommend this book.