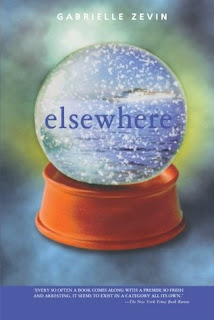 If you are looking for an unusual combination between realistic fiction and fantasy, this is the book for you. After Liz Hall dies in an hit-and-run accident, she awakens to find herself on a boat called the SS Nile with no recollection of how she got there. She eventually realizes that she is dead, and this is where all the dead people go. The boat takes them to a land called Elsewhere. In Elsewhere, when your birthday comes, you age backwards. For Liz, this means instead of turning 16, she will turn 14 again. (This, of course, makes her very mad.) When you are a baby again, you are sent back to Earth to live another life. It is sort of a unique turn on reincarnation.

This was an interesting book to read, but there are some areas that could be improved. One issue I had with Elsewhere was that nothing really bad happened. It made it seem like a perfect life. (Ha-ha, see what I did there.) It made the book not as interesting as I would have liked. It also didn't describe enough about getting younger. Almost the entire book is when she is still 15, and only a couple short chapters at the end are when she is younger. For a book about getting younger, I would have liked there to be more "getting younger." I also would have liked a little more information about what happens to you after you return to Earth.

What I liked was that it is so unique. There are books about heaven, or afterlife, but this is so different. There are no books like it that I have read. I like the concept, and I liked the beginning of the book, and how she was so clueless. I loved what the dogs were saying, and I thought it was funny that there is a dog language. I also thought that it was very clever to start the book with the viewpoint of a dog, and while it seemed weird at the time, it totally made sense as the book progressed.

I do recommend that you read the book and give it a chance.