Everblaze (Keeper of the Lost Cities Book 3) by Shannon Messenger 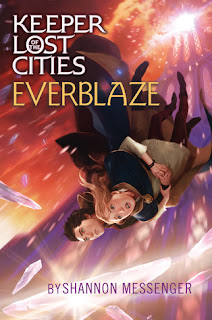 After I read the first book in the Keeper of the Lost Cities series last fall, I was so excited to read books 2 and 3. I requested them at my school's library, as well as the public library, but they still don't have them. I was extremely happy to receive them as a birthday present.

In book 3, Sophie Foster is tired of hiding. With her abilities stronger than ever, she is willing to do whatever it takes to solve the conspiracy and find the people who kidnapped her. Unfortunately, one decision goes too far, and leaves the world on the edge of war. She must face the truth, and realize that you have to be careful who to trust, and her worst nightmare might be closer than she ever imagined.

The cover art is pretty much the coolest ever! The second I saw the cover, I was like, "okay, this book better be as epic as that cover!" I mean seriously, falling off an exploding building? Yes, Everblaze was as great as the cover. Actually, even if I did not look at the cover, it is exactly how I would have pictured it.

Unlike books 1 and 2, the overall tone of book 3 is sad, although in a way it did help to see other sides of some of the characters, and it was still a great read. This was the longest book in the series so far, and the most dramatic. I really liked how much friendship was in it. Friendship is a strong element in the series, and I felt that Everblaze took it further than the others, and really showed how much they cared for each other. My favorite book in this series is book 1, but all three books are super!

The author, Shannon Messenger, said on her website that she is not sure if there will be a book 5, and that depends partly on the sales of her books. Please tell everyone you know about this awesome middle grade fantasy series! I highly recommend getting the box set of books 1-3 that comes out on August 25, 2015. I am so excited to read the fourth book, Neverseen, that comes out in November 2015!!!