H2O (The Rain) by Virginia Bergin 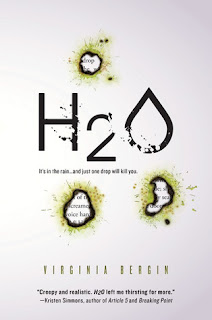 I got this sci-fi dystopian novel for my birthday, and was eager to read it. H2O, the American title, was previously published in the UK and called The Rain.

Awhile before the rain started, an asteroid was racing toward earth. Little did the scientists know, inside was a space bacteria that loves water. After destroying the asteroid, all the bacteria went in the clouds, and infected them. Ruby is at a party when the startling emergency alert goes out : "It's in the rain. It's fatal and there's no cure." Even a tiny drop, and the bacteria gets in your blood and destroys you from the inside out. (Pretty scary, right?) After two weeks, only .27% of the population is left. Ruby is all alone, and she doesn't have many options left with almost no food or water. Ruby must go across the country to find her dad, possibly her only hope for surviving.

H2O was pretty much the opposite of how you would organize the plot of a book. Normally, a book would start out kind of slow, and then gradually work its way up to the climax, but H2O was almost backwards. It started with all the excitement, and gradually got slower, like a car running out of gas. Also, the beginning was too dramatic with too much about how sorry she feels for herself. I really expected the book to be better than it was.

On the bright side, Ruby is such a determined character, and you never see a point where she gives up. She kept trying, even when others didn't. What is great about her is that you can feel her emotions. She did, however, yell a lot, although it was understandable. In the book, Ruby likes to use swear words, but instead of showing the words she used, the author put a little picture of a black butterfly, so we don't have to read whatever bad things she says. I like that the author decided to do this, and I have never seen that done before.

Although I was disappointed, I still want to read book 2, The Storm, which comes out in fall 2015.