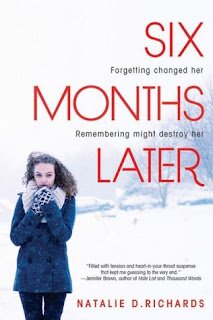 If you are looking for a great young adult mystery book, then read Six Months Later. Chloe fell asleep in study hall in May. When she wakes up, it is November, and she can't remember the last six months of her life. Suddenly, she has a boyfriend that she didn't have a chance with, Chloe's best friend won't talk to her, and weirdest of all, she may become valedictorian, which was impossible with the grades she had in May. It all sounds great, but it would be nice if she actually remembered it happening. She wants her memories back, but the truth might be worse than not knowing.

I really liked that there was not a cause that made sense. After the doctor finished looking at her, I was so annoyed that they didn't think anything of it, but it helped for the mystery part of it. I liked how I didn't expect some of what was coming. A few hints were given time to time, but you really had to pay attention to recognize what it is telling you. I liked the flashbacks, although I was not sure why they happened. There was a little more romance than I would have liked, but not anything to be concerned about for younger teen readers. Chloe was very shy, and that bugged me at first, but by the end you can see that it was a good thing to keep quiet.

Six Months Later has an edge to it, and it is really addicting. When writing mysteries, it can be easy to mess up by giving away too many hints or not enough, but this was not the case. I highly recommend reading this book.