The Other Normals by Ned Vizzini 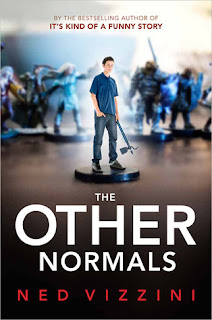 This is a book that is completely different than anything that I have ever read. Peregrine "Perry" Eckert is fifteen-years-old, and is obsessed with a role-playing game, Creatures & Caverns. He is kind of a math geek, and doesn't really have any friends. Perry's parents, concerned that their son has no social life and is a "late bloomer," give him his worst nightmare- summer camp! Even worse, he is not allowed to have any of his action figures or math stuff. He thinks he is in for the worst summer of his life. However, that theory is tossed aside when he stumbles into the World of the Other Normals. There he meets Mortin Enaw, one of the creators of the game, and other mythical creatures from the game, including Ada Ember. He learns that most of the people there he has already met. There are correspondences, which are basically two of the same person across a different dimension. In each dimension they look different and have different names and voices, but whatever one does effects the other. This being said, the only way to rescue their princess is for Perry to kiss her correspondence.


On the negative side, there is a lot of inappropriate language. You can't go a whole chapter without reading it. Also, there are some words that look like "di-." They say that it is not understandable to human minds, but it left me trying to fill in the blank with no idea whatsoever, which really threw me off. There were also a lot of parts that I felt didn't have to be mentioned, and kind of just filled it up with clutter. The Other Normals took a lot of points way too far, and even became inappropriate at some levels.

On the positive side, I really loved how the two worlds connected. It was funny to see the resemblance between the characters with their correspondences. Most books I have read about alternate dimensions and planets have nothing to do with reality, so this was much more interesting and a relief. I like Perry, and I think he handled himself incredibly well in the face of danger. He could think quick, and he was a hero. (Well, in the other world, at least.)

The Other Normals is not a good book, and it is not a bad book. I won't be reading anything more by this author. I was sad to learn that Ned Vizzini died at a very young age because of a poor choice. I am torn between recommending it or not, so go ahead and read it if you want.