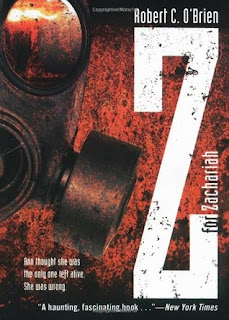 This is a book you may find on an 8th grade summer reading list for advanced readers. However, I think it belongs on a 9th grade list, due to the content. After the nuclear war happened, the world was radioactive and would kill a person if they were unprotected. Although, one area called the valley is safe to live in, and that's where Ann lives. Ann is sixteen years old, and all alone. Her family and all the others went to see if anyone else survived. They did not know about the nerve gas and radiation. They never came back.

One day, a man wearing a radiation suit arrives, and her life changes forever. She keeps an eye on him to see if he's dangerous. Then, he takes a bath in a radioactive creek and gets very sick. Ann finally shows herself and takes care of him. She nurses him back to health, putting him before herself. During his fever and delirium, Ann slowly begins to suspect that she should not have gotten involved. Her suspicions come true. Mr. Loomis is possessive, demanding, and controlling. Ann soon finds herself fighting for her life.

I really liked the book. I loved how Ann was able to take care of herself, and she handled being alone amazingly. For the world ending, she dealt with it by taking each day at a time and made the most of what she had. I admire her, and Ann seemed like an adult, the way she made decisions. I also liked the format, how the book was kind of like a diary in some ways, and it helped to connect with her. In general, it is a really good read.

An issue that I had was that when all the action happened, it was near the end of the book, and it ended too fast with a major cliffhanger. There cannot be a second book since the author died in the middle of writing it, and his family finished it for him with notes left over. I believe that the book would have been longer, and I don't think that it ended like O'Brien intended it to. I also did not like that sometimes Ann spoiled stuff herself. She says something, and then tells the events leading up to it, kind of backwards in a way.

This is a good book for 9th or maybe even 10th graders. I hope you like it as much as I did!