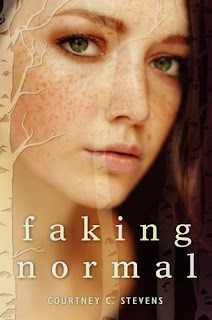 Last year, someone did something to Alexis that she will never forget. A year later, she has not told anyone, and deals with it by crying in her closet and scratching the skin off her neck. When Bodee's mom dies, he moves into Alexis' house. He is the only one who understands her, and they deal with their traumas together. With Alexis' help, Bodee might be ready to talk to the police, and with Bodee's help, Alexis might be able to finally tell what happened to her.

Faking Normal teaches about courage, and about being true to yourself. It has elements of friendship, family, and honesty. The characters deal with a lot of different teen things.

It was paced perfectly. Everything flowed together and was laid out nicely. The one thing I would change could be the end. All of the sudden at the end of Faking Normal it was all happily-ever-after. It caught me off guard. It was kind of like something you would see on a Disney movie. I do think that it could have been improved, and I think it was too sudden, but considering the ending as a whole, it was okay.

I just discovered that there is a digital prequel called The Blue-Haired Boy about Bodee. I definitely recommend this book, but only for older teens given the subject matter.