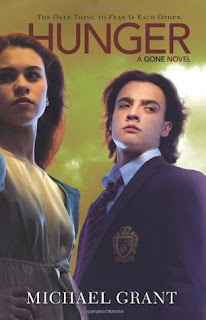 Hunger is the second book in the young adult dystopian series, Gone. Three months ago, everyone 15 or older vanished, leaving the kids on their own. Some developed supernatural abilities that set them apart. Ever since, it is powerful vs powerless. Bullies become power-hungry and fight non-stop to get what they want. Food is running out, and nobody wants to take on the role of getting food. The battles become worse every day. Resources are limited, and everyone is struggling to stay alive. Meanwhile, the students at Coates Academy plot to take over the power plant, which the ultimate source of power.

The title is literal, and also not. True, everyone is hungry, but that is just a small part of it. Hunger is the combination of hunger for power, and also hunger for food. In the beginning, I thought it was just about food, and I did not understand until much later. In this book, it is important to look at it from all angles, and there are a lot of hidden meanings that you have to look hard to find.

There is one thing that did not make sense. Over and over throughout the book, it says it has been three months. When the first book (Gone) ended, it was around October, right after Sam's birthday. In the beginning of this book, it says it is March. October to March is not three months, so I think the author forgot to explain something.

Overall, this was a good book. I liked the concept and the continuation of events. I am excited to read the next book, Lies.

Read my review of the first book in this series, Gone.