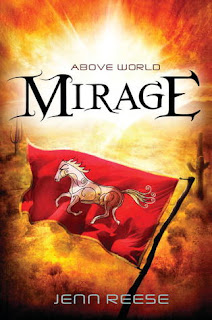 Mirage is the second book in the middle grade fantasy and science fiction trilogy, Above World. Aluna, Hoku, Dash, and Calli are on a mission to save the world from Karl Strand, who wants to rule the world. Aluna and Hoku are Kampii, which is half human, half mermaid. The desert is the last place they would rather go, especially since Aluna is secretly growing her tail. The Equians (half human, half horse) are up next for Karl to conquer, which means they must travel to Mirage and warn them. Unfortunately, they are too late, and Karl's clone Scorch has gotten there first. To make matters worse, Dash was exiled from Mirage, which complicates their visit, since a broken exile means death.

With the leader of the Equians ready to go into war with Karl and Scorch's army, the only way to have them switch sides is if Aluna and her friends win the Thunder Trials, a competition of the arts, tech, and one-on-one combat. The herd who wins gets control over the desert for a year. If they fail, the four friends will die, and the desert will be under Karl's control forever.

The determination of Aluna in Mirage was great. She kept her hopes up, and went out of her way to protect Dash and win the Thunder Trials. She kept getting injured, and growing a tail does not make it easy to run, but she kept going.

I was very intrigued throughout. I really liked the mix of characters, and their personalities. Despite their differences, they all worked together to help the greater good, which was being done by nobody else. All the other tribes have always lived apart and kept separate, which has changed by the influence of the group. The plot was good, and the flow was pretty steady. The tone and writing style fitted the book perfectly.

I cannot wait to read the third and final book in the series, Horizon.

Read my review of the first book in the series, Above World.