The Tragic Age by Stephen Metcalfe 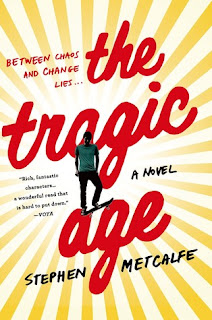 The Tragic Age is a young adult realistic fiction read about finding yourself and learning things the hard way. Billy Kinsey is seventeen years old, and he views seventeen as The Tragic Age. For example, his twin sister, Dorie, died of leukemia, and his parents are on the verge of getting divorced. Billy is a genius, but fakes being normal, and hides in the shadows playing his drums. Then, he is influenced by two new people. Twom Twomey (yes, that is his name) is a new student who believes that being a little rebellious is all a part of life.

Gretchen Quinn was a friend of his sister, and becomes his new girlfriend. She believes in experiences, and that anything is possible. Even though Gretchen is his girlfriend, he is more influenced by Twom. Billy knows he is leading toward disaster, but does nothing to stop, which he will soon regret.

I really liked the internal conflict in The Tragic Age. Billy is being pulled both ways, and he has to decide what he would rather do, which is really hard, since it is black and white. He doesn't know how to do gray, so against his better judgment he goes with Twom. The entire time, he knows what he is doing is wrong, but he doesn't have enough confidence to stand up and stop. The book really teaches about telling the difference between right and wrong, and how things end up if you do the wrong thing. The Tragic Age also shows that you can turn around, and that one bad thing does not define you.

The reading level is really middle grade, but due to some of the fighting scenes and other content, it is actually a young adult book and better for high school readers. I really recommend this book.