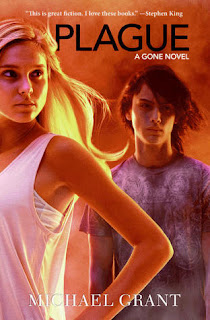 Plague is the fourth book in this young adult dystopian series, Gone. Sam and his friends have been without adults for eight months, and they are barely surviving. Things were just starting to get back to normal (or, at least the closest thing to normal in the FAYZ) until multiple disasters strike. Mutated bugs are attacking and harvesting in humans, a highly fatal, contagious disease is spreading, and on top of it all, they are almost out of water. Everyone is out of hope, and now their thoughts are not about getting out; it is about staying alive.

I was so excited to read Plague and see what adventures the teens have next. The disasters bring everyone together, and they really have to get past their personal issues with each other to survive. However, it was not really clear what the plague was. There were three disasters happening at once, and it was hard to focus on them separately. While I like the idea of the mutated bugs, some of the details are too graphic for my liking.

Some of the characters that the previous books said were evil actually helped to fight the bugs, and you got to see good and bad characters working together, which has never happened before.

Overall, Plague was a good fourth book, and I cannot wait to read the next book, Fear.