The Hunted (The Living #2) by Matt de la Pena 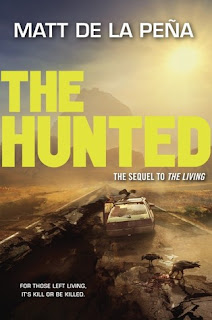 The Hunted is the sequel to The Living, a young adult dystopian book. When the earthquake hit, Shy was at sea working for a cruise ship, and he was one of the only survivors. Addie, the daughter of the head of LasoTech, tells him a huge secret, which is the reason for over a million people dying from Romero Disease, but as soon as they get to safety, she disappears with her dad. Shy and his friends return home, where everything is a disaster, and thanks to the secrets that he knows about LasoTech, he is a wanted man of one of the biggest companies in the world.

I love that The Hunted is a completely different atmosphere than the first book. The Living was about surviving nature, while this book is about surviving people. It was very exciting, and I liked the variety of setting.

The cover is actually very accurate. There is a scene where I pictured it looking just like the cover. Every detail on the cover art is incredible and very exact, which I do not come across often.

It was so busy, and the chapters felt like a paragraph instead of three pages. By the end of the book, I was so shocked that it was over since I felt like I was only reading for a short time.

Overall, The Hunted is a great sequel, and I very much liked the ending. I recommend that you read the two books in this series.

See my review of the first book in this series, The Living.