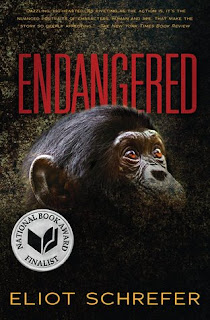 After reading Threatened by Eliot Schrefer, I was excited to read Endangered, since it is also a realistic fiction book about animals and survival by the same author. Sophie's parents are divorced. She lives with her dad in Miami, and visits her mom in the summer in Congo. She has a sanctuary for bonobos (apes), and Sophie wants nothing to do with it. That is, until a baby bonobo named Otto comes into her life. However, the fun and games don't last as long as she hoped. When a civil war erupts in Kinshasa and the president dies, Sophie and Otto escape into the jungle with the bonobos in an effort to stay alive.

Sophie is a very sophisticated teenager, and her thoughts and words seem like they should come out of an adult, which I liked. I thought that she handled herself very well in the complex situation that she was in.

Even though the majority of the book took place in a war, it was not scary or upsetting, since there were animals in it, too. I liked that this book had the right amounts of sadness and happiness, creating a perfect blend of emotions. Endangered helped teach me about bonobos, as I previously had no idea what they were, and about the Congo. The deep visual of the setting made me feel like I was really there. The pace of the story also sped up and slowed down, appropriately depending on what the characters were doing. The story is very suspenseful and full of emotion.

I recommend that you read this book.

See my review of Eliot Schrefer's other book, Threatened.