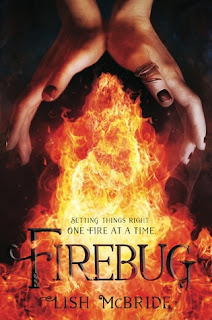 .
Firebug is the first book in this young adult fantasy series. Ava is a firebug, which means she can start fires with her mind. Filled in a world with many, many other magical beings, firebugs are rare and powerful, which makes them desirable. The mafia agency Coterie has had her in a contract since birth. Ava's mother died from orders from Venus, who is now her boss.

When Venus asks Ava to hurt someone she loves, she snaps, this being the last straw. Everyone knows you can't say no to them and get away with it, at least, not with Venus. Ava and her friends run away, knowing that one mistake could result in death.

The story moves really fast. It appears to take place over the span of about a week, which made me doubt a little bit how much could happen in that timeline. I loved how black and white it was. All the characters were either good or bad, and all the characters thought that of each other. There was a huge lesson about that.

The second book, Pyromantic, is supposed to be coming out in March 2016. I will read the second to see how it is. I sort of recommend this book.