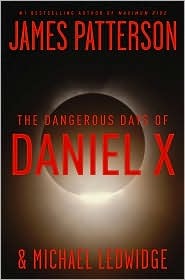 The Dangerous Days of Daniel X is the first book in its young adult science fiction fantasy series. Daniel has the power to create. He can create anything he wants, and can become anything he wants. He is the protector of Earth, the Alien Hunter. When he was three years old, his parents died from one of the aliens on The List. Now, he is carrying out his father's wishes, and starts defeating the aliens on the list, one by one.

One thing I didn't like about the book was that it was really hard to understand. A lot of times it was hard to tell whether something was real or created. It also felt like there were a lot of things going on at once. I disliked the fact that I could not connect to Daniel at all. He was just another character, but I could not feel anything special about him, just his powers. I was drawn into the super powers, but there was not really much excitement with them.

On the bright side, The Dangerous Days of Daniel X got better as the book continued. I liked that it was very suspenseful, and some of the ways he chose to use his powers were very funny! The story is creative, but the writing needs improvement.

There are six books in this series. To be fair, I am going to try reading the next book to see if the writing and character development improves.