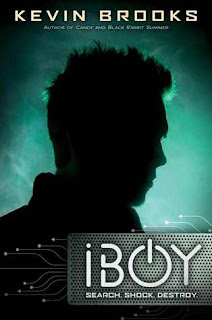 iBoy is a young adult science fiction book that combines humans and technology. Before, Tom Harvey was just a normal teen living a normal life. But after someone threw an iPhone at his head from the 30th floor of his apartment building, pieces of an iPhone got stuck in his brain. Tom can now do everything a phone can do, plus the ability to shock things from up to three feet away. He becomes known as iBoy, a superhero protecting the violent local area. The same people who threw the phone at him were the same people who attacked his friend, Lucy. With his new powers, Tom will take the law into his own hands, and hunt down the gangsters who hurt her.


A huge lesson in this book is that revenge is never the answer, and it only creates more problems. iBoy shows that with having great power comes great responsibility. Tom also has a lot of self conflict. He is hacking into government stuff, and doesn't know if he should feel guilty.

The idea of iBoy is so original and interesting. I love that it made me think, and that I could picture myself in the book. Being able to connect to the audience is very important in a book. At the top of the first page in every chapter, there would be a quote or a fact that was relevant to the content in the chapter.

I highly recommend that you read this original book!