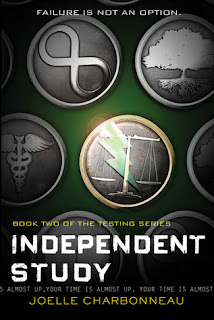 Independent Study is the second book in in the YA dystopian trilogy series The Testing. The world was divided and disastrous after the Seven Stages War. The government of the Commonwealth created The Testing to find the best leaders for the next generations. Cia was very happy to be chosen for The Testing from her colony of Five Lakes, but that happiness did not last long. Cia had to watch her friends be literally eliminated from making a mistake.

She is one of the few that passed The Testing. The government erased all memories of The Testing experience so the horrors would be kept secret. However, the tests are not over, and she is still not safe. Thank goodness, Cia left herself a recording of her testing, and she has dreams of what happened. She remembers things. Her attempt to stop the ways of The Testing will put her in a lot of trouble, but the future of her world depends on her trying.

I really loved the amnesia of it. All these people have no idea what they went through and the people they lost except Cia and her boyfriend Tomas. When faced with the next tasks, Cia was so smart and ahead of everyone due to remembering and the fact that she is a great leader who cares about the lives of people, unlike her government. However, the fact that Cia is so amazing and special makes the other characters look kind of bad, but that makes the story more interesting!

I also really liked that the tests that the Commonwealth made them go through were less dangerous than the ones in the first book. I also liked the tension between Cia and Tomas due to what they remembered.

I highly recommend that you read this book, and I cannot wait to read the last book in the trilogy, Graduation Day.

Read my review of the first book in the series, The Testing.